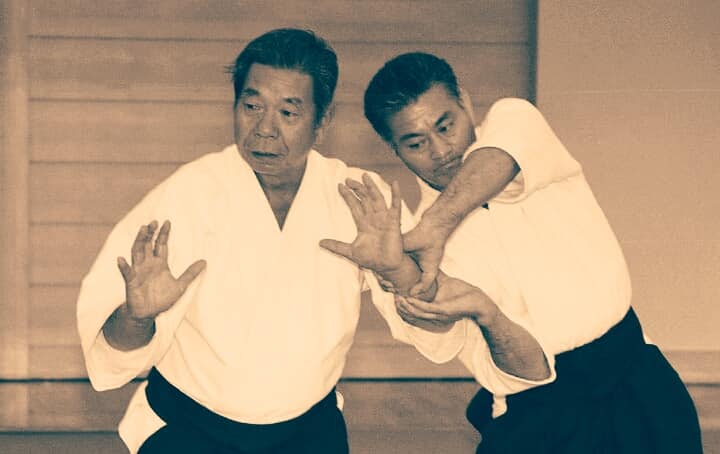 The weakening of the building, following the numerous falls, and the lack of space lead the founder to move his dojo. After collecting sufficient financial donations and with the support of Koshiro Inoue (Noriaki’s father) and the Ogasawara family, Morihei managed to acquire land in the ushigome district .

With the help of Zentaro Miwa, the Ueshiba family established, in 1930, a temporary dojo in the Mejirodai district, while waiting for the construction of the future dojo to be completed.

Their internal students (uchi deshi), Noriaki Inoue and Hisao Kamada, accompany them in their new home. New disciples joined them shortly after, among them Montaro Mori then Ikkusai Iwata recommended by Doctor Kenzo Futaki, a pupil of the first hour of master Ueshiba.

In October 1930, Jigoro Kano was invited, by Admiral Takeshita, to a demonstration by Master Uehiba at the Mejiro dojo. Impressed by his virtuosity, the founder of Judo offered to hire Morihei to teach Kodokan. Despite the mutual respect of the two men O Sensei refuses the proposal of the founder of Judo.

Kano sensei then asked Shuichi Nagaoka, Minoru Mochizuki and Jiro Takeda , among his best students, to study Aiki-jujutsu with master Ueshiba. The gradual move of the Ueshiba family and the uchi deshi, Inoue and Kamada, to Ushigome, from December 1930 to spring 1931, marks the end of the temporary dojos.

Thanks to the efforts of Admiral Takeshita and his patrons, the opening of an authentic dojo in Wakamatsu-cho, Ushigome, the commercial district of Tokyo, finally makes it possible to welcome a larger number of students, in connection with the growing reputation of master Ueshiba.

The wooden building of about one hundred and twenty square meters is named Kobukan , “the imperial warrior’s dojo”. The training area is made up of eighty tatami mats. The building also houses the accommodation of the Ueshiba family and the quarters reserved for boarding students.

The pace of life is intense, in parallel with household chores, uchi deshi train four times a day, in the early morning, late morning, afternoon and evening. Most of these young men are also advanced practitioners of other martial disciplines, the practice is severe and the dojo earns the nickname “hell dojo”.

Faced with a heavy teaching load, master Ueshiba must rely on several assistants to fulfill his commitments. With Noriaki Inoue and Minoru Mochizuki, Hisao Kamada is one of the senpais (elders).

Coming from a family of followers of Omoto Kyo, Hisao is in charge of daily prayers in front of the Shinto altar of the house and that of the dojo. He must prepare water, rice and salt every morning…

Entrusted by his family to the Ueshiba, the young Kamada does not pay registration or boarding fees like the other uchi deshi, but must in return fulfill several administrative tasks. He takes care in particular of the inscriptions and donations of the Kobukan then transmits them to Mrs. Ueshiba.