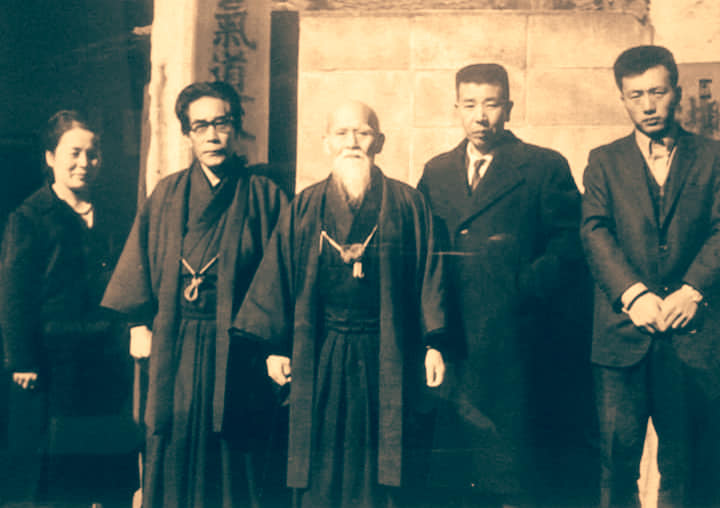 Michio Hikitsuchi was born on July 14, 1923 in a village near the town of Shingu, a small coastal town in the prefecture of Wakayama.

Orphaned from a young age, his father died when he was two years old and his mother when he was seven years old, Michio was raised by his grandmother. Practicing Naginata (halberd), she directs him towards the practice of martial arts to prevent it from dispersing. It begins first with Judo and Kendo at 9 years old, then the art of Yari (spear), Bajutsu (art of riding a horse), Shuriken (art of throwing) of Iaido or Karate Go -Ju-Ryu.

Michio first met Morihei Ueshiba in 1937. Master Ueshiba, who comes from the town of Tanabe, a town near Shingu, is a friend of his grandmother. It is Yoshihiro Kubo, on the initiative of the coming of the master, who introduces him to the young boy of 14 years old, recent winner of a local martial arts competition. At that time Ueshiba Sensei did not teach his art publicly, then called Aiki-Budo; to become a student, you must be recommended by five guarantors. However O Sensei accepts Michio as a disciple, despite his young age, and tells him “you were born to do budo. You must study Aiki budo!”. Michio thus becomes the first adolescent student of Master Ueshiba.

Very grateful and impressed by Ueshiba Sensei, Michio decides to put all his energy into his service. He considers his art as the highest expression of Japanese budo and to better assimilate his teachings, he studies, in addition to his technical training, the classics of Shintoism such as Kojiki, Nihongi as well as Zen Buddhism.