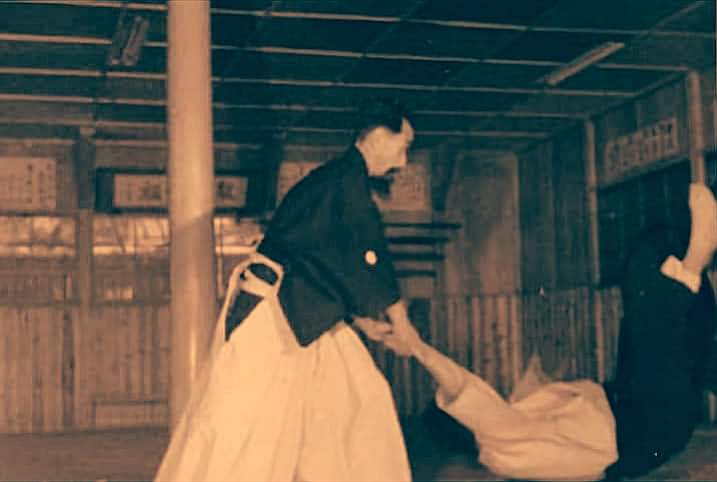 During World War II, Sugino’s home and dojo were destroyed by bombing raids on Kawasaki. Sugino and his family fled to Fukushima, where he spend most of his time in martial arts training and used his medical knowledge (he had run a bone-setting clinic from his dojo in Kawasaki) to help the injured. After the war, the family returned to Kawasaki, where his clinic became very busy treating the war-wounded. By 1950, he had constructed a new dojo.

In 1953, Sugino was asked to provide sword instruction for the actors in Akira Kurosawa’s film, Seven Samurai. Originally the work was shared between Sugino and Junzo Sasamori of the Ono-ha Itto-ryu, but Sasamori pulled out early in the filming due to teaching commitments abroad. Sugino’s choreography for the sword-fights departed from earlier, Kabuki-influenced work and focussed on making the scenes as realistic as possible. Here is an excerpt from an interview:

“On one occasion he was visited by Seiji Miyaguchi, who had initially refused his part in the film on the grounds that he did not feel up to playing the role of a strong, stalwart samurai. But Kurosawa talked him into it, telling him there was no need to worry since skillful camerawork could be relied upon to strengthen his image.”

“Miyaguchi came to Sugino to ask for instruction for the scene in which his character Kyuzo — one of the most famous in Seven Samurai—makes his first appearance. Miyaguchi listened carefully to Sugino’s instructions and was soon managing beautifully despite his utter lack of experience. He spent two days practicing what he had learned and with a little extra coaching during the actual filming the scene became one of the most outstanding in Seven Samurai and in the history of the genre.”