The story of an amateur Muay Thai fighter 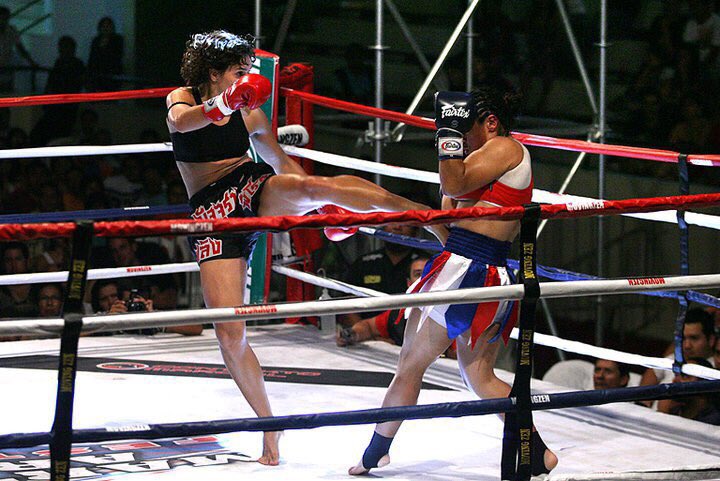 When people find out that I am an amateur muay thai fighter, the first thing they often ask is whether I am scared when I get in the ring. To a certain extent, yes: thai boxing is known as the art of eight limbs, where punches, knees, elbows and kicks all come into play. As an amateur, I’m not at the elbows stage just yet, but even so, fighting isn’t exactly a risk-free activity.

The truth is, I am a fighter because I was looking to escape parts of my life I found more difficult than being punched in the face.

Outside the ring, I am the master of avoiding things I don’t want to deal with. When I was 16, my grandfather died in a house fire the day before my GCSEs started. My reaction was to not tell any teachers or friends until later, pretending that it didn’t happen. I thought I was being mature, but all I was doing was tucking away the grief and trauma to fester for another day. In the background, anxiety and depression became the fabric of my day-to-day life, but only in parts I could safely hide from others.

Denying the erosion of my mental health became a recurring theme throughout my 20s. I had wanted to be a journalist for years, with wide-eyed dreams of making a difference. But as a young member of the newsroom adept at navigating the murkier parts of social media, I was often the person looking for the worst possible videos on the internet in the thick of terror attacks.

Those first few hours after a suspected terror incident are crucial to figuring out exactly what is going on, filled with misinformation from bad actors and people who are just vying for retweets. In among those are the witness accounts, pictures and videos that tell you what is really going on. I wrongly assumed my mental health would be safe when I switched off my screen.

When the panic attacks and flashbacks began, death and violence was on autoplay. Even when I was away from computers, I felt an overwhelming sense of shame – what journalist can’t handle the realities of the world? It turns out I was dealing with the effects of vicarious trauma, where someone is affected by traumatic incidents they weren’t directly exposed to.

A very bad day meant crying on the tube during rush hour, which became peak panic attack hour. I’m not proud of the person I became: irritable, miserable and not much fun to be around. I quit my job, got another one, only to quit that, too. Anger would swivel to hysteria most days and I couldn’t figure out why – it is only recently that I have pieced together why my mental health crumbled in this way.

One day, I got an email about a local charity boxing event, where you trained for eight weeks and then fought at the end – and this particular event offered the option to do muay thai, a sport that I had always wanted to try. As a teenager, karate had been a big part of my life, although I was never much of a competitor. At 18, I did one tournament, got knocked down and hated every minute of it. I knew a muay thai fight would be much harder. Thailand’s national sport is one of the toughest combat arts around. The thought of it terrified and exhilarated me in equal measure.

That first fight camp was probably more exhausting than terrifying and I realised exactly how unfit I was when I threw up after the first session. I got battered in every sparring session I attended, ending up with a gigantic bruise on my left leg. I cried in the showers, limped out of the gym and thought about not going back. But I strapped my leg up and ended up winning that first fight.

Two years and seven fights later, taking up muay thai was the best decision I ever made. I train six times a week, hitting pads, clocking up the rounds on the bag, sparring, clinching and topping it all off with strength conditioning and more running than I thought possible.

Last month, I fought, and won, at the Indigo in the O2, alongside some of British muay thai’s best and brightest. If I could bottle up the feeling I get when I step in the ring, I would. The adrenaline when the bell chimes; looking at my opponent’s chest and trying to figure her out, like a dangerous puzzle: is she a kicker or a puncher? Does she like to clinch and knee or is she going to try to sweep me to the ground? And how likely is she to knock me out? All of that is even sweeter if your hand gets raised at the end.

Muay thai didn’t heal me, but it brought everything that was foggy into focus. And it means much more to me than just fight night: my fight team is my family. I have won fights, I have lost fights. But the real fight has always been within myself.