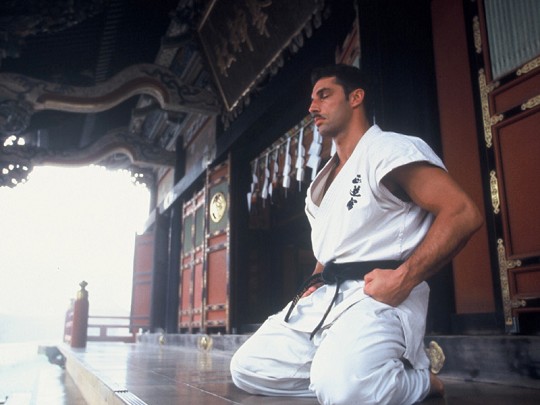 Andreas “Andy” Hug (September 7, 1964 – August 24, 2000) was a Swiss karateka and kickboxer who competed in the heavyweight division. Considered to be one of the greatest heavyweight kickboxers of all time, along with Mirko Cro Cop, Peter Aerts, Remy Bonjasky, Ernesto Hoost, and Semmy Schilt.

Hug was renowned for his ability to execute numerous kicking techniques rarely seen in high-level competition and although he was usually smaller than his opponents, standing at 1.80 m (5 ft 11 in) and being barely a heavyweight, weighing around 98.0 kg (216.1 lb; 15.43 st) in his prime, he made up for his lack of size with his tremendous athleticism and speed.

A southpaw, his trademark kicks included the axe kick and the “Hug Tornado”, a low spinning heel kick targeting his opponents’ thighs.
Raised in Wohlen, Aargau, Hug was a keen footballer in his youth but gave up the sport to pursue Kyokushin karate which he began practicing at ten years old.

Beginning his full contact karate career in the 80 kg/176 lb middleweight division, he rose to prominence in the late 1970s and early 1980s by winning numerous regional tournaments around Europe and made the transition to heavyweight in 1984. That same year, he competed in the Kyokushin World Open, knockdown karate’s most prestigious competition, for the first time and made it to the fourth round where he was eliminated by Shokei Matsui. He became the first non-Japanese fighter to make it to the final of the competition but again lost to Shokei Matsui.

After winning the 1992 Seidokaikan Karate World Cup, beating Taiei Kin in the final, and finishing as runner-up to Masaaki Satake in the 1993 edition, Hug then transitioned to K-1 kickboxing, scoring a first-round knockout of Ryuji Murakami in his professional debut at K-1 Andy’s Glove in November 1993.

After a breakout win over K-1 Grand Prix ’93 Champion Branko Cikatić in March 1994, Hug entered the K-1 Grand Prix ’94 a month later as one of the tournament favorites but was upset by Patrick Smith via the first-round stoppage in the quarter-finals.