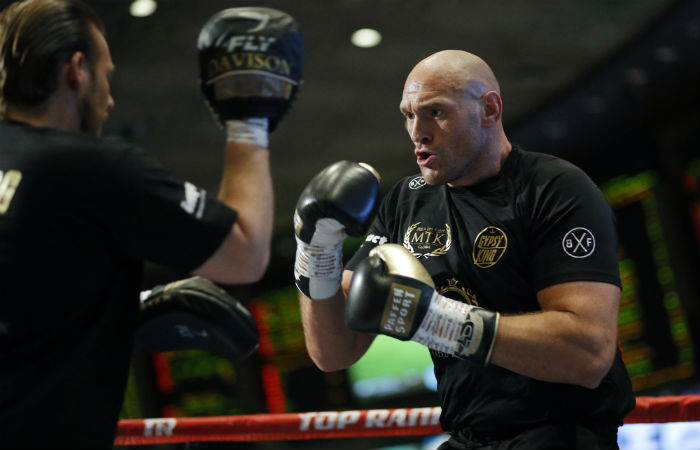 Former unified world heavyweight champion Tyson Fury is just days away from his next fight against Otto Wallin.

This Saturday the pair will meet in Las Vegas, as many believe that the bout will be just like the one against Tom Schwarz. If and when Tyson get the W, he’ll be fully focused on his next adversary – Deontay Wilder or Luis Ortiz.

With that being said, the 31-year-old Brit found the time to chip in on the Anthony Joshua-Andy Ruiz 2 topic. “The Gypsy King” shared his thoughts on the trimmed Joshua and even advised him on what he should do in order to get his titles back.

‘I see he’s lost a bit of weight, he’s been taking notice of people saying he’s got too much muscle on him,’ Fury told BT Sport.

‘But really that can be taken out of context as well.

‘You can’t change a bull into a racehorse. It doesn’t work like that. A racehorse can’t tow a wagon or a heavy load. Doesn’t work. So if you take that big heavy horse, strip his muscle off, and then put him in the same cart he was in trying to pull that heavy load again he’s not going to manage it.

‘Clash on the Dunes’: @Andy_destroyer1 and @anthonyfjoshua promise a historic battle in Saudi Arabia’s Diriyah, fittingly known as the ‘land of kings and heroes’ https://t.co/chXeLO7W4S pic.twitter.com/rSRvAnppLi

“So I think they are going to try to lose weight and try to move a lot. But you can’t do that in one camp, that takes a lifetime practice.

‘We saw Tony Bellew try to do it against Usyk, tried copying my style but after eight rounds his legs went.

‘It works, it’s effective, I’ve been successful 29 times in a row with it. You can’t learn it overnight. What tends to happen with new things in new camps is when someone practices something in the gym for eight, 10, 12 weeks, and then they go in a fight and try to do it, as soon as they get clipped or get tired, they revert straight back to what they once knew.

“I’ve seen it many, many times. As soon as he holds his feet and starts to fight back, he loses in my opinion.

‘But if he can get on the jab and box and move, which I’ve never ever seen him do, amateur or pro, for 12 rounds which for a heavyweight is a very hard thing to do, at some point he’s going to have to stand and fight. And if he keeps running away from Ruiz with the jab, he’s not got the footwork to do that. Work on what you’re good at, that’s what you’re good at. Tighten your defense up and go forward and smash them.’