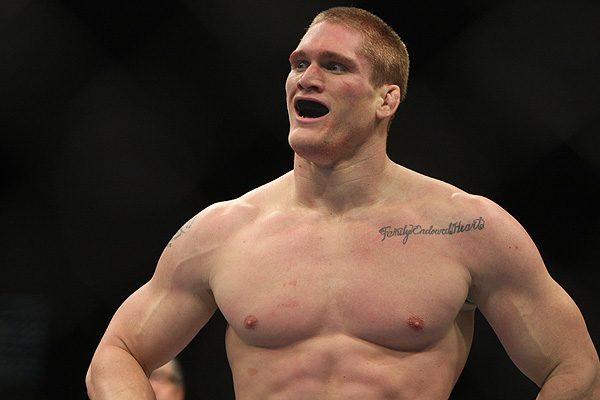 After two knee surgeries and a MRSA scare, Todd Duffee isn’t making any promises about his timeline for a comeback.

The UFC heavyweight had just informed the promotion he was ready to fight this past July when he suffered a knee injury. Then his entire world turned upside down. Again.

Duffee, 33, told MMA Junkie Radio he was sparring Blagoy Ivanov at “The Ultimate Fighter” gym when he stepped wrong on the cage and punctured the fence with his leg, blowing out his ACL.

During the surgery, doctors discovered Duffee (9-3 MMA, 3-2 UFC) actually needed surgery on his other knee. Last December, he went under the knife again, only to contract the dangerous infection at home in recovery.

On the day of his admittance, the last thing Duffee remembers is yelling at his doctor to change his antibiotics, then driving himself to the hospital because he was getting tired.

“I wasn’t managing well enough, and boom, it just hits you,” Duffee said. “And it hits you quick. You know it. You get this anxiety over you, like, man, I feel real uncomfortable. I don’t feel good, but you have this inert anxiety, and it hits you fast. You’ve just got to go to the hospital.”

The next two days were a blur.

“Day 3 was when I finally called my mom,” he said. “I tried to play it off the first few days I was there, but that stuff is nasty.”

Duffee heard grim statistics about survival rates and remembered former heavyweight champ Kevin Randleman’s gruesome bout with the infection. Eventually, though, he started to feel better and was able to leave a hospital. For the next month, he had an IV line stuck in his arm to deliver antibiotics.

So that’s been 2019 for a heavyweight once touted as the Next Big Thing in the UFC octagon. It’s not at all what he planned. But after so many forks in the road, he’s not overly bent out of shape about this one.

Recently, Duffee moved to Las Vegas so he could do physical therapy full-time at the UFC Performance Institute. A recent return to the gym did not bring the realization that he’d be back sooner than later. He may need another knee surgery before he’s fully ready.

All of these haven’t muted Duffee’s desire to compete. He’s been told several times that he needs to retire. But that was before he started working at a world-class facility with experts that will help him get back on his feet.

He’s taken fights with shingles in his eye, a fractured knee, and all the other bumps and bruises that come along with his career. When he returns this time, he will be as relatively healthy as can be for what he does.

“At this point, I’m just thinking about my clock,” he said. “I’ve not had the career that I’ve put the time into. I owe myself 20 more fights, at least. That’s what I want. What’s realistic, we’ll see.”