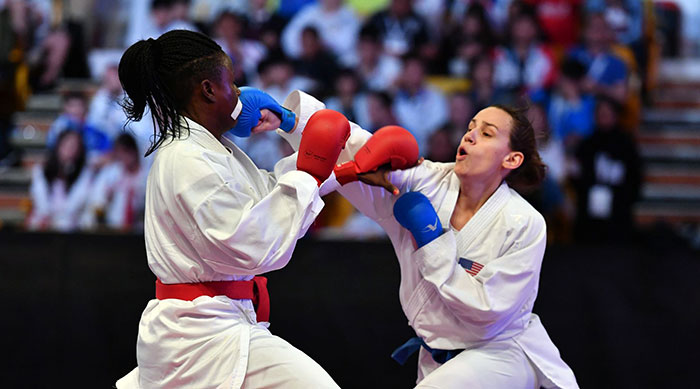 The 2019 PKF Pan American Championships finished in Panama with Douglas Brose, Thomas Scott, and Maria Dimitrova among the biggest stars of the event. The United States extended their domination of the competition as the first nation in the medal table.

Douglas Brose of Brazil became one of the biggest heroes of the event as the two-time World champion produced a remarkable come-back to regain the continental title. The 33-year-old karateka was absent in the last edition of the tournament due to an injury but managed to return to winning ways in Panama to claim his sixth continental crown. Brose edged Uruguay’s Maximiliano Larrosa in the final of Male Kumite -60kg by 1-0.

Thomas Scott of the USA also performed at an outstanding level and took his fifth continental in Male Kumite -75kg. The 29-year-old karateka from Texas earned his second consecutive gold at the Pan American stage with a slim 1-0 victory over Jamaica’s Alton Brown in the final.

The final day of action of the 33rd edition of the PKF Championships was also marked by major upsets. Maria Dimitrova of the Dominican Republic took the spotlight of the event after producing one of the biggest shocks of the competition. The 33-year-old Karate star had lost four consecutive continental finals against Sakura Kukomai of the USA. However, the Dominican Kata queen put an end to the losing streak with an outstanding performance on the tatamis in Panama. Dimitrova excelled in her presentation of “Chibana No Kushanku” kata and got a 24.82 score to defeat Kukomai in the final. With this victory, the fan favourite from the Dominican Republic recovered the crown which she won for the last time in 2014.

The other big upset of the day occurred in Male Kata. Ariel Torres of the United States won his first gold medal in international competitions after defeating big favourite Antonio Diaz of Venezuela. Diaz, the most awarded karateka of all times was aiming for his 17th continental title but ended with the silver medal since Ariel Torres surprised with his performance of “Anan Dai” kata. The promising karateka from the USA took a score of 25.52 to win the continental crown.

Also surprising the top favourite, Merillela Arreola of Mexico defeated Jacqueline Factos of Ecuador in Female Kumite -61kg. The 4-1 triumph in the final helped Arreola to regain the title that she had claimed in 2016.

Meanwhile, in Male Kumite -67kg Colombia’s Guillermo Ramirez beat Camilo Velozo of Chile to win his first ever gold medal. Velozo arrived at the title-deciding bout as the front-runner after his bronze medal at the World Championships; however, the Colombian karateka won the title by “Hantei” or decision.

The representatives of the USA topped the final medal table with a tally of 14 medals and five golds. It is the second time in a row that the delegation of the North American powerhouse nation of the sport claims the first place of the final ranking. In addition to Thomas Scott and Ariel Torres’s victories, the USA team celebrated the titles of Cheryl Murphy in Female Kumite -68kg, Maya Wasowicz in Female Kumite +68kg and Sabahudin Tricic in Blind/Visually Impaired Male. Cheryl Murphy defeated team-mate Skylar Lingl by 2-1 in the final while Maya Wasowicz beat Venezuela’s Omaira Molina 5-3.

The 33rd edition of the continental competition also crowned new names taking the event by storm. In Female Kumite -50kg, Aurimer Campos of Venezuela had lost the last two finals of the event but the 25-year-old karateka defeated Ana Villanueva of the Dominican Republic in the final by 4-1.

In Female Kumite -55kg Alessandra Vindrola of Peru took her first gold in international events and improved the silver medal that she claimed in 2016 after producing the most impressive victory in the finals today, an 8-0 triumph over Canada’s Kathryn Campbell.