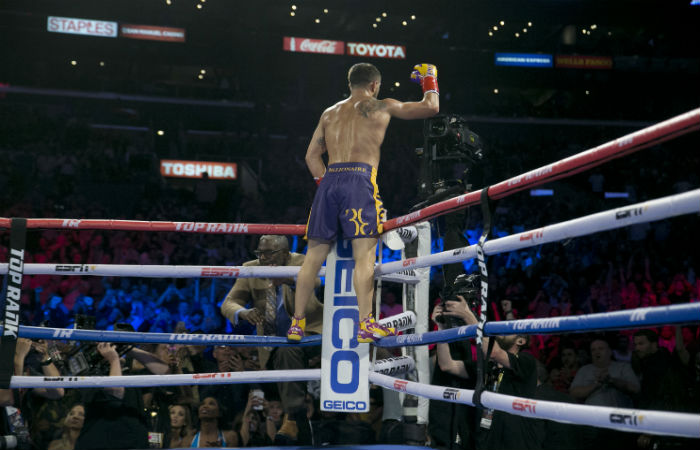 Vasiliy Lomachenko did the job tonight against Richard Commey, winning a clear decision over 12 rounds and largely dominating the action, as he looks to get right back into a title fight in his next outing.

Referee Steve Willis didn’t step in, and despite the open and obvious advice from Lomachenko mid-round to Commey’s corner, telling them to pull their fighter out, the Commey corner didn’t, either.

Commey did gather himself, but it’s also fair to say Lomachenko never truly pressed the rest of the fight. He was up big, he was in clear control, and he’d read by then that while dangerous, Commey didn’t present an immediate threat if Lomachenko simply did not make mistakes, and Lomachenko was not making mistakes tonight. The 33-year-old Ukrainian southpaw looked sharp and on point, but you have to credit Commey, 34, for showing the amount of heart he did, too.

Lomachenko could well get a title fight next, and he had the attention of WBA/IBF/WBO titleholder George Kambosos Jr, who said on Twitter that Lomachenko is “in the equation” along with WBC titlist Devin Haney, Gervonta “Tank” Davis, and Ryan Garcia. For now, Kambosos is still insisting his next fight be in Australia, which is fully his right, he’s earned that, but if the right money comes in to do something in the States, you have to expect he’d consider it, too. Otherwise, to do Australia next, he might have to take a lesser fight than any of those, but time will tell there.

Commey honestly fought pretty well tonight, but Lomachenko was in proper “Loma” form, and by the fourth round or so looked in complete control. His skills and style still make him a terribly tough matchup for anyone on paper at 135 lbs, and he will once again have plenty of attention on what he does next.