Vitor Belfort calls out Brock Lesnar: ‘He doesn’t like to get hit’ 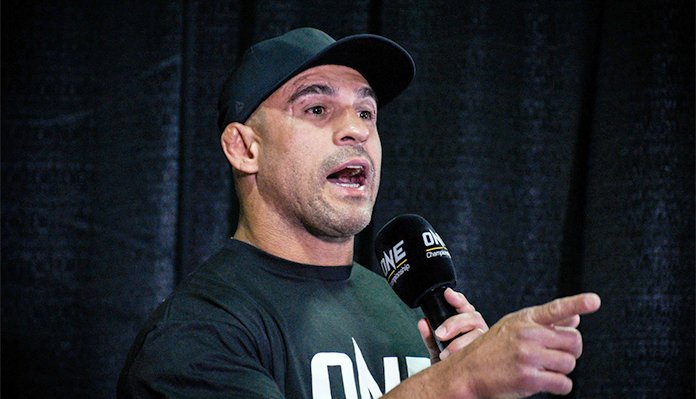 News broke that the former UFC heavyweight champion and WWE superstar became a free agent after completing his WWE deal, drawing interest across the martial arts world. While Jon Jones voiced his interest in having Lesnar as his first challenge up at heavyweight, Vitor Belfort threw his name in the hat as well.

Speaking with Submission Radio earlier this week, Belfort said he would be “ready to go” against Lesnar in 4 to 8 weeks. “The Phenom,” who also held a UFC belt in the past, is currently under contract with ONE Championship and expected to face Alain Ngalani in a heavyweight contest.

“Brock Lesnar, I think you’re a fraud. But I’ll give you a chance,” Belfort said. “I think you’re a fraud. If you really want to fight with me, let’s go bare hands, me and you. We put the gloves, we go combat, you know? I know you’re a very tough man. I heard you’re a grappler, but I’ll fight you, man. I’ll fight you any day, any time, and I think that’s a legendary fight right there. But I think he’s a fraud in MMA.”

Belfort reckons that a clash with the pro-wrestler would mean big business for him and ONE, but explains why he calls the 43-year-old a “fraud.”

“(He’s a) fraud because he never paved the way, man,” Belfort said. “He never fought MMA. He went there and he got a chance. He fought for the belt after one fight. Listen, I tell this to everyone, you listen to me very clearly, the only sport in the world, the only sport in the world where you can come in from any other sport, is MMA. An MMA fighter can never cross to football. They can never cross. Michael Jordan tried to cross from baseball and he couldn’t make it. Why? Because you have a process to make it. So, that’s what it is.

“We need to understand that MMA, a combat sport. Even YouTubers can fight. Even like if you’re a hockey player you can come and fight in these rules. That’s why it’s good, man, that’s what makes MMA so possible. You don’t need to have a career, you can make a career and you can become a persona and people can like you and they can buy you. Look at what Kimbo Slice did. And some make it. I take my hats off to the gangster, (Jorge) Masvidal. Because he really paid his way, man. People don’t realize, that guy paid his way. He deserves it.

“So, I respect fighters that really paid their way. They deserve to be in the spotlight. But, you know, I understand he can be in the spotlight of WWE. So, that’s what I mean. A fraud for MMA is this. He doesn’t deserve it, but he sells, man. Let’s go Brock. I’ll put my hands on you. That would be nice. I’ll make him pink.”

Lesnar hasn’t fought under MMA rules since July 2016, when he scored a decision victory over Mark Hunt in his return from WWE. Lesnar’s win was later overturned to a no contest after he popped for banned substances.

Lesnar hasn’t won a MMA match since a submission over Shane Carwin in July 2010, losing his UFC belt to Cain Velasquez three months later and then suffering a first-round technical knockout defeat to Alistair Overeem in Dec. 2011.

Belfort parted ways with the UFC after a second-round knockout loss to Lyoto Machida in May 2018, inking a deal with ONE Championship almost one year later. “The Phenom” hasn’t competed in a heavyweight bout since a 2006 decision loss to Overeem at Strikeforce.

“But, you know, (Lesnar) comes from WWE, he knows how to sell, but for MMA, he doesn’t like to get hit,” Belfort said. “And I’m telling you, I can hit him pretty hard… You’re a big man, I got you. I’m willing to fight big men, man. I’m not scared. The king of the jungle is the lion, not the elephant. So, Brock Lesnar, you’re right down my alley, my friend.”