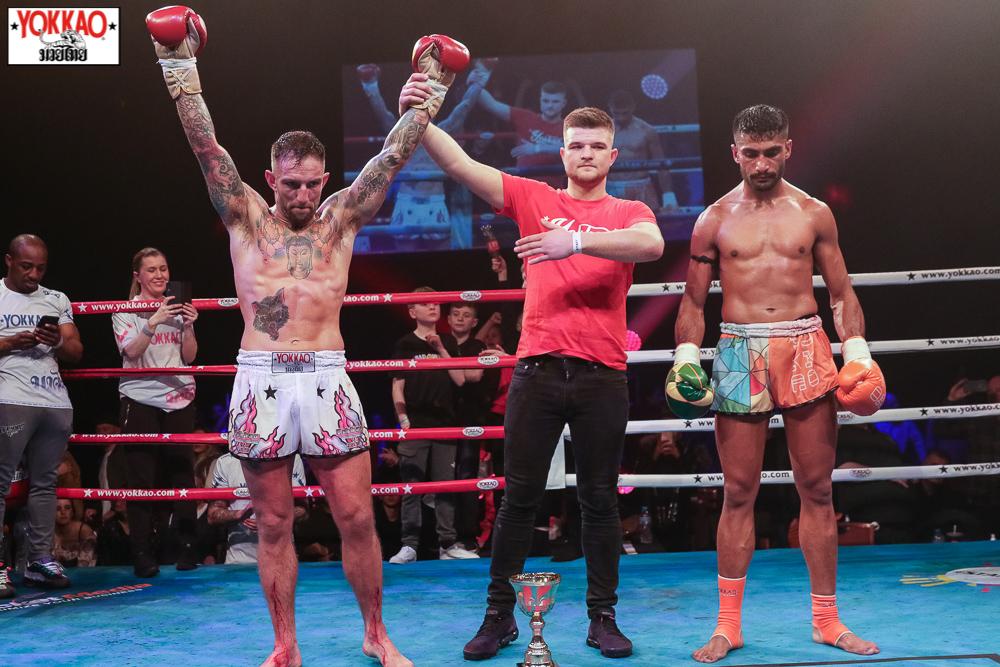 The University of Bolton Stadium arena was packed to the brim once again last Saturday, 7 March. It was a full day of Muay Thai, beginning with the YOKKAO Kids in the morning, followed in the afternoon by the Next Generation pre-show and the much-anticipated YOKKAO 47-48 double event.

After a brutal knockout fest last October, the mayhem continues in Bolton with bloodied elbow wars and perilous quests up the fighter rankings. More than half of the 11 fights on the main card ended by way of knockout. Fans were kept at the edge of their seats, as the best of the UK lit up the stage in a grand display of blood and glory.

After 10 exciting bouts on the undercard, the main card kicked off with 3 back-to-back show-stopping finishes. The action culminated with the five-round clash between Brian Totty and Noel Gomis in the co-main event bout of the evening.

KO of the Night:
Anton Austin vs Manuel Rubio Gomez

Fighting out of Paul Karpowicz’s 2Technical Gym, Anton Austin brings an unpredictable style to the ring against Spanish dynamite, Manuel Rubio. Both fighters turned up the heat right from the start with unrelenting back-and-forth action. Austin got caught with a right hook in the second round but fought back hard against the forward-moving offense of the Spaniard. After a few attempts, a perfectly-timed spinning back elbow from Austin got through in round four to stop Gomez and the bout. It was a knockout for the highlight reel.

Fight of the Night:
Brian Totty vs Noel Gomis

It’s Scotland versus France in the co-main event with Brian Totty taking on Noel Gomis. Despite stepping up in one week’s notice, the French showed himself to be no walkover. Totty took things in stride against Gomis’ hard punches and elbow strikes, pacing the fight with technical counters and textbook clinching. The Scotsman’ carefully-strategized plan worked to his advantage, and he took the win on points after five hard rounds.

The action continued after a brief intermission with one scorcher after another. Mexican sensation, Joshua Tuzo made a statement with his UK debut, stopping Adam Haslan with a liver shot in round two. Niall Brown took over as UK number one with a vicious elbow KO against Joe Craven, while Niamh Kinehan proved herself again as one of UK’s best female fighters with a dominating victory against 9-time champion, Stephanie Page.

KO of the Night:
Stuart Stabler vs Jonno Chipchase

YOKKAO 47-48 is considered by many to be one of our best UK events to-date, with a great mix of brutal knockouts and elite-style clashes. Respect was shown by every fighter, regardless of the results with appreciation shown by the fans for all competitors. It was a night of great sportsmanship that truly exemplified the spirit of Muay Thai.

England vs England 72.5kg
Niall Brown won by round-3 KO vs Joe Craven