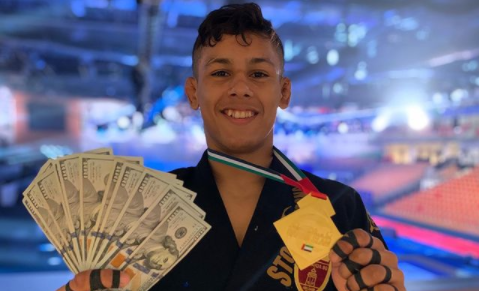 FEBRUARY 02, 2022, BALNEÁRIO DE CAMBORIÚ, SANTA CATARINA, BRAZIL was the home for the most talked-about tournament of the year, thus far, the first run of the ADCC Brazil Trials, a submission-grappling competition designed to bring out the best Brazilian athlete to challenge for the promotion’s world title in September.

The ADCC is widely regarded as the Olympics of no-gi jiu-jitsu (also known as submission-grappling or submission-wrestling), and considering Brazil is one of the biggest talent pools in the sport, it was only natural that these tournament’s trials were met with great enthusiasm. It is worth noting that this was the first run at the South American trials in Brazil, with those who did not conquer their spot in the tournament still holding one last chance to do so next weekend, at the São Paulo Trials (also in Brazil). Although a test to the athletes’ will and body, for the fans the proximity of these two events means back-to-back action between the sport’s very best.

As expected, the event was an outright success. Overall, in the male division, there were 84 submissions accounted for in 168 matches, which is exactly a 50% submission rate. A very high number for such a high-level tournament. Below you will find the trials champions and tournament results:

We had alluded to Diogo Reis being one of the favorites here in our preview piece (here) and the teenager did not disappoint. Although a gi specialist and a former roosterweight, Reis managed to pull it off against the elite of the featherweight division, a masterclass of competitiveness by the 19-yo Melqui Galvão black belt. One by one, Reis eliminated the favorites of the tournament, including Diego “Pato” and Fabricio Andrey.

Another teenager and another gold medal for professor Melqui Galvão. In the 77-kilogram division, it was his son, Micael who took gold in a spectacular performance of physical, mental, and technical prowess. It was incredible watching this young man work at an incredible offensive pace.

Very impressive was also Magid Hage. The veteran grappler went through to the finals submitting everyone in sight. 5 wins and 5 submissions before facing Galvão.

The medium-heavyweight division had two very clear front-runners in former open-weight ADCC World champion Claudio Calasans and Dream Art team leader, Isaque Bahiense. Both are very tactical grapplers who know how to play the clock and the ruleset better than anyone in the game, and that they did. In the end, it was Bahiense who came out the victor and you can expect him to be a real force in the division come September.

This was a very fun division to follow, with a fair share of new blood mixed in with the old. Showman Henrique Cardoso (AKA “Ceconi”) was his usual self with plenty of aggression, fast-paced takedowns, and scrambles. Ceconi’s top-heavy game ended up stifled by Fight Sport’s João Costa. The part-time grappler who trains in Miami, Florida came in very strong and took the division by storm with a precise performance.

The US closed its borders to Roosevelt Sousa last year, preventing the talented black belt from making his name known overseas, but the young Brazilian may very well have found redemption today. A flawless performance for Sousa who submitted ALL of his opponents, and like a Bat Out Of Hell (RIP Meat Loaf) submitted them fast, and will probably be well recognized by the US fans when he visits next September.

The only purple belt on the winners’ list of the Brazilian Trials, Jinana shocked a few with her performance today. Sais benefited from a small division and had only two matches to obtain her gold medal, nevertheless, two very solid wins for the rookie.