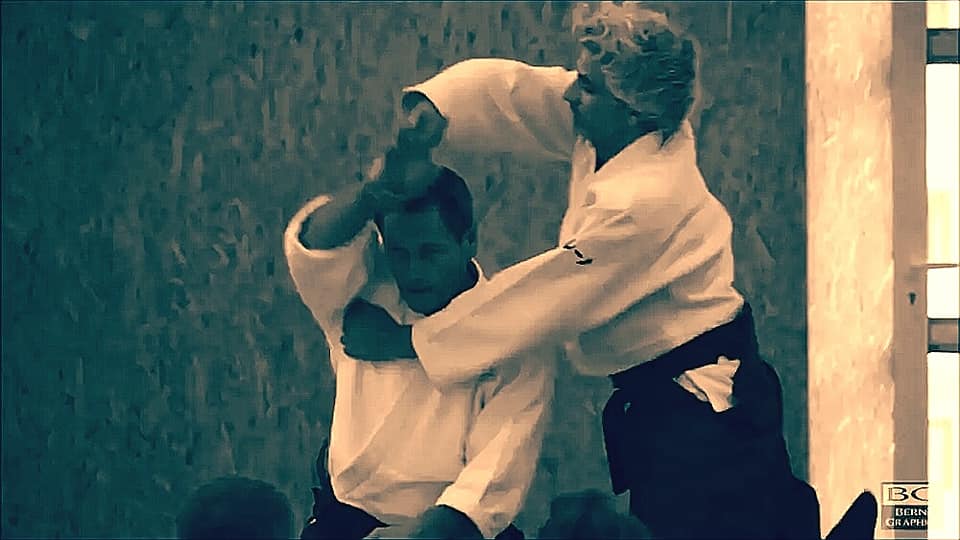 The neck lock attack is done from behind, and is not really a strangulation. The attacker just holds the defender and adds a grip on one of the defender’s wrists to avoid counter measures. Properly, it should be called something like ushiro katatedori kubishime.
In practicing the defender should make sure to turn the head to the side where the attacker’s elbow is, in the neck lock, so as to avoid unpleasant pressure on the throat, and for men on the adam’s apple.

You start by getting the grip on your wrist to your front, in the same way as with ushiro ryotedori – twist your body to get your hand on the hip. Here you have to remain with your head in the fixed position, while your hip moves to fetch your hand. Immediately upon getting your hand on your front, you slide out of the neck lock by turning circularly in a direction away from the elbow. Don’t turn in the direction of the elbow, or you’ll only get more stuck in the lock. Away from the elbow, and in close contact with the attacker’s body.

If you try to lean forward, the neck lock just presses harder on your throat. Instead, lean back, almost pushing the attacker backward, and then make the turn away from the elbow. It’s not that difficult, even if the arm lock on your neck is hard. Do it swiftly, to avoid the attacker increasing the pressure on your throat.

At the same time as you sneak out of the neck lock, you get under the attacker’s other arm, on which you do the ikkyo. You must step back to the side, out of the attacker’s reach, or you will end up in a weakened position.

As soon as you have passed under the attacker’s arm, extend yours to hold it up and off, so that he or she cannot regain the lock, or another grip on you. The rest of the ikkyo is easily recognizable.