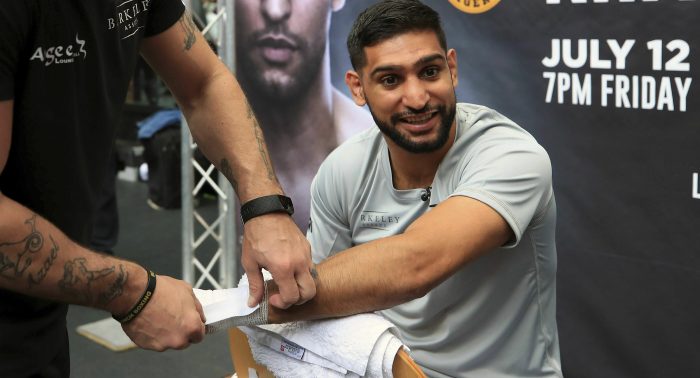 Former unified light-welterweight champion Amir Khan is eager to get back to the action after a long 12-month hiatus.

The British fighter was last seen inside the ring in Lujy 2019 when he defeated Billy Dib in Saudi Arabia. Now the 33-yer-old boxer is eyeing fights against people like Manny Pacquiao, Keith Thurman, and Danny Garcia. Khan even mentioned the likes of UFC superstar Conor McGregor and his fellow countryman Kell Brook.

Khan said he has probably two more fights left and it is understandable why he is looking out for the big money.

“I want to get back in. I’ve started my training camp again in my own gym,” said Khan to BT Sport. “I’m quite lucky I’ve got my own gym.

“I’m itching to go because I wanted to get my last few fights out of the way, and then call it a day and walk away from the sport. I am getting a little bit older.

“I’m 33 now. I wanted to get a couple of fights this year, but now the whole year is almost gone, and I’ve had no fights. I’d definitely like to mix it with the top guys. I’ve been in the top 10 in the world for the last 12 years.

“It would be nice to fight someone in the top 10, and maybe fight someone for a title once again. You’ve got the likes of Danny Garcia there, Keith Thurman there.

“You’ve got some good names that I still want to mix myself in with, and let’s see how this goes and plays once this is all finished,” said Khan.

“I’m not going to chase it,” said Khan on a fight against Manny Pacquiao. “If it falls into my lap, then I’ll take it. What a fight that would be. There’s so much we can talk about in that fight because we trained together, and we sparred over 300 or 400 rounds of sparring with each other.

“We know each other quite well. Yeah, man, I’d love that fight. I think I know a lot about him, and he knows a lot about me. That would be another good one, but if it happens.

“There’s always been talk about it, but it’s never seemed to materialize. That was nonsense,” said Khan when asked about the rumors that Pacquiao had put him on his backside. “I was never put down by Manny Pacquiao.