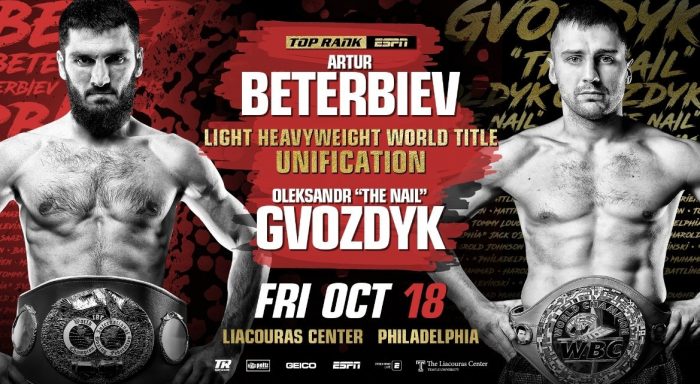 Artur Beterbiev unified the IBF and WBC light heavyweight titles tonight, and maintained his perfect professional record with a 10th round stoppage of Oleksandr Gvozdyk.

Beterbiev and Gvozdyk put on the sort of high-level, hard-hitting fight that should have been expected of two elite fighters in their primes, living up to the hype for fight fans in a back-and-forth contest that saw both have success.

Beterbiev (15-0, 15 KO), though, was just the nastier, tougher man in there tonight, and that’s not to take a single thing away from Gvozdyk (17-1, 13 KO), who proved plenty tough himself, taking a lot of hard shots to the body and head from Beterbiev before finally being broken down.

Gvozdyk started nicely in the opening round, which ended with the referee calling a knockdown of Gvozdyk, controversial at best and just a flat-out terrible call more realistically. The Pennsylvania commission checked the instant replay and rightly overturned the call, however.

Beterbiev seemed more able to do visible damage than Gvozdyk throughout the bout — his hard shots pushed the Ukrainian back pretty frequently, but Gvozdyk was able to box and land his own good shots enough to keep it highly competitive.

Still, by the middle rounds the body language seemed to be favoring Beterbiev pretty clearly, and that’s how things wound up playing out. Beterbiev did real damage to Gvozdyk in the ninth round, then dropped his opponent three times in the 10th. Finally, Gvozdyk was just physically and mentally broken down by the hard-charging Beterbiev, and the fight was stopped at 2:49 of round 10.

After the fight, Beterbiev was asked if he would like to face WBA titleholder Dmitry Bivol, or perhaps the winner of the Nov. 2 fight between Canelo Alvarez and Sergey Kovalev for Kovalev’s WBO belt.

“It doesn’t matter,” he responded. “Anyone. Anyone. I’m focused on titles, not on names.”