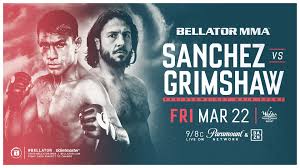 The second fight between Emmanuel Sanchez and Georgi Karakhanyan played out differently, but the result was the same: Sanchez having his hand raised in the end.

“El Matador” swept the scorecards with three 29-28s to pick up a second win over Karakhanyan (28-9-1) in the Bellator 218 main event Friday at WinStar World Casino in Thackerville, Oklahoma.

When the two featherweights first fought at Bellator 170 back in January 2017, Sanchez won a majority decision after a three-round bout that was mostly contested on the feet. This time around, Karakhanyan made it abundantly clear that this would be a wrestling-intensive match, which suited Sanchez just fine.

Sanchez (18-4) spent almost the entirety of round one with Karakhanyan in his guard and managed to avoid any major damage even as he fell behind on the scorecards. The momentum shifted in round two as Karakhanyan failed to initiate much offense off of his takedowns and Sanchez eventually countered with one of his own.

Unlike Karakhanyan, Sanchez was able to land strikes from top position and later maneuver into back position to take a clear-cut second round.

Karakhanyan shot in for a takedown right away to start round three, but failed to do more than just hang on as Sanchez controlled his head. Sanchez landed ground strikes on Karakhanyan where he could until he was able to twist free and end up on top with two minutes remaining. Karakhanyan couldn’t get out from under Sanchez and ended the fight absorbing more ground-and-pound.

The judges scored the fight in Sanchez’s favor and afterwards, he apologized for there not being more action, putting the blame on Karakhanyan, saying “he didn’t want to fight me tonight.”

Sanchez, who has now won five of his last six fights, used his post-fight speech to campaign for another booking soon, preferably against either A.J. McKee or Pat Curran (the two are scheduled to fight on May 11 at Bellator 221).

“They think they want some, but they don’t really want none, as you can see,” Sanchez said. “It’s a different world, it’s a different story when you’re in here with me. So everybody watching, every featherweight watching, I’m coming for every single one of you.

“I’ll stay ready for the McKee-Curran winner, in case anything happens to ‘em, but I’m hungry and I’m ready to fight. I’m still hungry to fight.”

In the co-main event, Valentin Moldavsky (8-1) spoiled former light heavyweight contender Linton Vassell’s heavyweight debut with an impressive display of grappling that earned him a unanimous decision via a trio of 29-27 scores.

It was actually Vassell (19-8) who initiated the grappling early on, closing the distance to nullify Molvadvsky’s powerful counter-punches, and bringing him down to the mat.

From there, Moldavsky defended and worked to sweep, setting the tone for a bout that was a back-and-forth encounter in the early going. Vassell would take Moldavsky down, Moldavsky would sweep, and Vassell would power up back to the feet to reset the cycle. As the fight went on, this routine began to favor Moldavsky and Vassell visibly faded in the third round.

Moldavsky scored a takedown to start the final frame and never let up. He landed punches and rode Vassell to the finish, giving the Englishman no chance to explode off of the canvas. For his efforts, Moldvasky likely closed out the fight with a 10-8 score.

With the win, Moldavsky is now 3-0 inside the Bellator cage, while Vassell has lost three straight bouts.

It wasn’t easy, but Anatoly Tokov (28-3) improved to 4-0 inside the Bellator cage with a second-round submission of veteran middleweight Gerald Harris (25-8-1). The 29-year-old Russian was rocked badly by an overhand left in the first round and it looked like Harris would put him away with hard shots on the ground.

However, Tokov survived the onslaught and managed to stand and tie Harris up, even scoring a takedown and landing ground-and-pound to close out the opening round.

Tokov stayed on the offensive in the second period, needing just 32 seconds to take Harris’s neck and finish with a front choke.

After a series of unfortunate events led to him snagging a main card spot, middleweight Norbert Novenyi Jr. (4-0) made the most of his opportunity by out-grappling Will Lavine (1-2) en route to a second-round submission win. The son of Hungarian Olympic wrestling gold medalist Norbert Novenyi, the younger Novenyi made the family proud by snagging a body lock early and dropping Lavine to the mat.

Lavine showed grit, defending against ground-and-pound and a deep-looking guillotine attempt, but eventually succumbed to a head-and-arm choke at the 4:05 mark of the second round.