Conor McGregor calls for rematch with Floyd Mayweather, ‘I’ll send his head into the bleachers’ 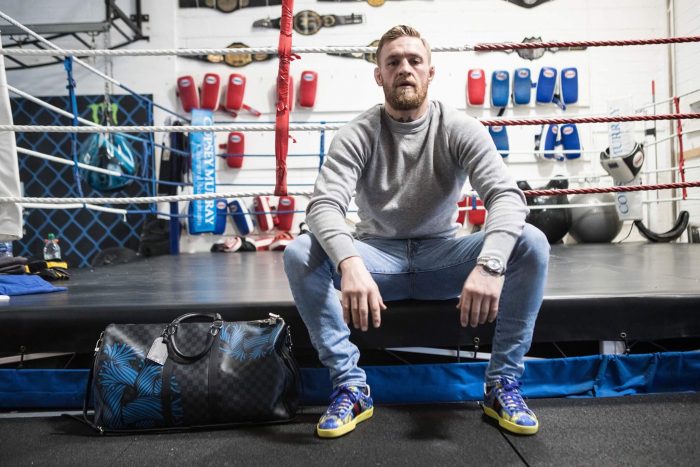 Conor McGregor is looking for a fight and there are a lot of rematches he has in mind. During a recent Q&A in Chicago, McGregor was asked about a potential rematch with Floyd Mayweather.

McGregor took aim at Mayweather’s financial habits and said that he believes Mayweather will have a time where he needs to fight because he spends too much of his money.

“Floyd fought great,” McGregor said. “Usually he fights defensive against the ropes. Against me, he changed it up. The boxing world had not seen Floyd compete like that, that Mexican style, hands up over his eyebrows, marching forward. In my preparation when I was sparring, all my sparring partners were on the back foot, with the shoulder roll against the ropes, the way he usually would fight.

“When he came and switched that up, I wasn’t prepared. His experience showed through and he got the win. You can’t do nothing but respect that because that takes 50 pro fights to gain that experience and be able to switch through the gears like that.

“I prepared for the style he originally came out with, and I was whooping his ass when he came out that way because I was prepared for it,” McGregor continued. “When he switched up to a different style I wasn’t prepared for, he ended up getting the win, so much respect.”

Conor McGregor acknowledged what went wrong in his training camp leading up to the Floyd Mayweather fight and what went wrong during the fight, but he would go on to say he believes the rematch should happen and if it does, things would go much differently this time.

“Next camp, and I do believe it should happen, I mean, why not? Why not?” McGregor asked. “If I have sparring partners in my camp that march forward, trust me when I tell you, I’ll send his head into the bleachers.”

McGregor spoke about several different topics during the Q&A session, but he made it clear that he’d like to get a few of his losses back, including the boxing fight with Floyd Mayweather.