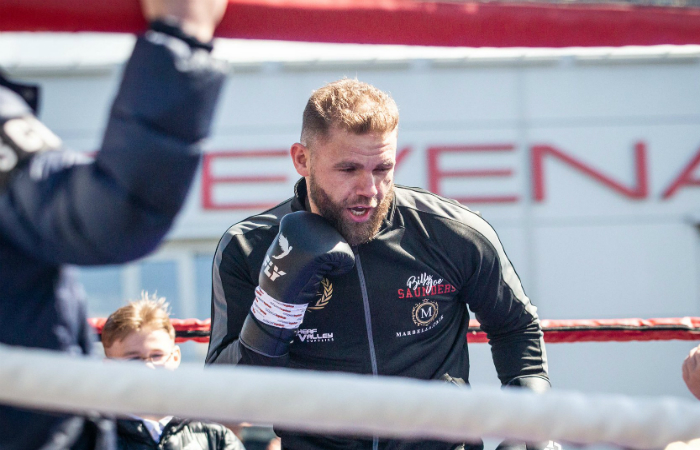 During an online video chat captured by Fight Hype, Billy Joe Saunders shares his thoughts on exactly where he’s looking to go at this point in his career and which fights he really wants, knowing that Canelo Alvarez represents the biggest fight out there for him. Check out what Saunders had to say…

“I know I can beat Canelo Alvarez,” Saunders said. “But when all these people come around you and feed you all this shit because they just wanna be around you and all this rubbish, I just can’t be dealing with that. My boxing speaks for itself. People can run me down and say this and say that — I’ve never been beat and I believe I’ll end up unbeaten. You got some good, good fighters out there but I know the next thing I want to do is beat the invincible man, you know, Canelo Alvarez.

“He’s the big one they’re going on about. You know, I’m lucky enough to have MTK guiding me and they’re doing everything to make sure this fight goes ahead and happens. But that’s the one I want because to be the best, you have to beat the best. And, you know, when I was coming through the rankings…John Ryder’s an unbelievable good fighter but I beat John Ryder when he still had his 0…before that I fought Gary ‘Spike’ O’Sullivan, again unbeaten. My boxing alone and the pedigree I’ve got from being an amateur, it would take a lot to untangle me — that’s for sure. So why wouldn’t I want to fight the best? And that’s what I’m gonna do.

“With Golovkin, you know, he’s been beat by Alvarez. But if they said to me ‘right, you’re gonna fight Golovkin or Alvarez,’ I’d choose Alvarez. But they’re the two fights I would. You know, all these other big names, these big superstars they’re going on about — Danny Jacobs, all the other big fighters in the way — they had their chance, they’ve been beat. You know, let me have a chance. If I get beat, I’ll get beat. I’m the fairest man in the world. If I get beat by someone who’s better than me, I can only shake their hand. But my main goal is to get ginger bollocks in the ring and to see what I can do.”

On if he thinks a Canelo fight will happen within the next year:

“It’s a bit hard for me to say because I think the promoters and the managers and everyone else are literally on the blow trying to make the fights as we speak. But then the venue, you know, the capacity, are the TV gonna back that sort of money for that package of a fight without the crowd? And I don’t know is it gonna be behind closed doors or do we have to wait when all this is over. So there are certain things that we’re sort of waiting on the government for really, rather than the promoters and everybody else.

“These promoters can say we’re looking to do big shows behind closed doors but, really, are they gonna be big shows in the back of a garden somewhere?! No, they’re not. And I’ve been in the game a long time, I know how the rules work. It’s gonna be very difficult to make big, big fights in an empty arena. It’s very difficult. Fighters will have to take big pay cuts.”