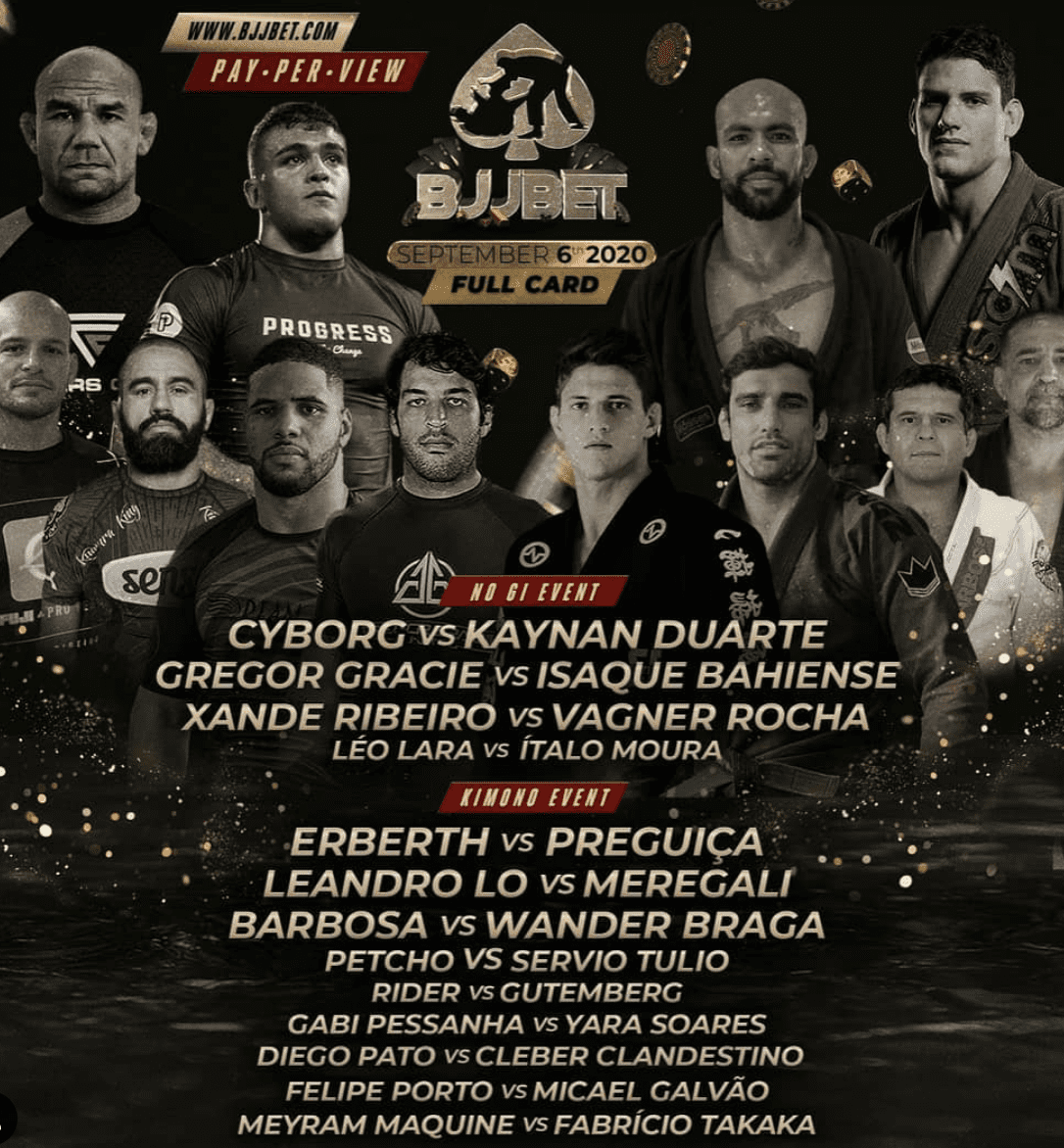 SEPTEMBER 07, 2020 – The BJJ Bet promotion announced itself as “The Future Of BJJ”, but left a bitter-sweet taste in the mouths of grappling fans due to a clumsy start of its broadcast. The promotion did, however, manage to resolve its crashed site issues in time for the stream and the exciting match-ups that laid ahead.

The event proved to be an extremely high-value production. The set-up, the venue, and even the announcer, Lenne Hardt, a call-back to the Pride FC days, BJJ Bet had a plush “look-and-feel” to the whole show. The downside of this apparatus was that it featured too much; pre-match interviews, athlete promos, post-fight interviews, walk-ins, interviews with the president of the São Paulo Federation, etc., all of which, we would argue, were overkill and led to a very lengthy event. nearly 5:30 hours of broadcast for 12, 10-minute matches. But there were lots of positives to take away from the event, particularly the matches.

MATCH OF THE NIGHT

1) Marcos Petcho and Sérvio Túlio put on a real show for the fans. Non-stop action and scrambles between two of the most exciting young black belts on the Brazilian circuit. Marcos spent the majority of his time trying to pass Sérvio’s guard, with the two exchanging plenty of scrambles, one of which ended with Marcos Barbosa’s star pupil on Túlio’s back, with a choke fully locked with less than 30 seconds to go. Outstanding performance.

2) Also among the matches of the night was Leandro Lo x Nicholas Meregali. The match ended in a draw, which, we are sure, will have left a taste of disappointment for both athletes, but not for the fans. This was a hard-fought match by both competitors. Every inch was fought for with both Lo and Meregalli getting close to scoring.

PERFORMANCE OF THE NIGHT

If anyone had the Midas touch tonight, we would say that someone was Isaque Bahiense. In his match against Gregor Gracie, the Dream Art leader had a flawless performance, taking Gregor down, passing his guard, and ending the match with a tight guillotine against a very worthy opponent. Isaque looked sharp, strategic, and forward-moving.

An interesting side-story of the Felipe Pena vs Erberth Santos rematch was a bet made between these two athletes backstage. Both put down 10k dollars each on the table, to be given to the victor, according to BJJ Bet.

Preguiça and Santos have a long history of rivalry in this sport, and a long history of bad-blood, with Erberth jumping out of the stage during their last match to assault a member of Pena’s team on the stands. A match that, for obvious reasons, was stopped and left unfinished. The two grapplers decided to settle the score at BJJ Bet, and the promotion was all the better for it.

The match had a tremendous start. 5 minutes of non-stop action with Erberth taking the better of Felipe early on, taking Pena down and attacking the back, putting the Belo Horizonte native in imminent danger. When it looked like the old Santos was back, as soon as Felipe Pena swept and got on top, the shadows of Erberth’s new persona returned. Santos appeared to quit as Preguiça passed and mounted for the verbal tap of the Esquadrão team founder.

SUBMISSION OF THE NIGHT

Without a doubt, Roberto Cyborg deserved the submission of the night award. What a performance and what a submission by Roberto, who is 18 years older than his rival, Kaynan Duarte. The match was short, both exchanged in the stand-up unsuccessfully, with Kaynan opting to pull guard. In a leg entanglement exchange, initiated by Duarte, it was Cyborg who got the better bite on the heel of Kaynan, forcing the tap.

“NON” MATCH OF THE NIGHT

The higher the climb, the harder the fall. We had in Xande Ribeiro x Vagner Rocha one of our favorite matchups, but unfortunately, the match did not provide the excitement we had hoped. Rocha came in with his standard game plan of throat pushing and neck tugging, which frustrated Xande’s guard, but did not amount to much, and neither did Ribeiro from his back.

The match turned to over-time, which had a very exciting last 30 seconds, where Rocha almost took Ribeiro’s back after a standing exchange, but ultimately did not secure the points and the fight ended in a draw.

All in all, an uneventful affair but impressive of Mr. Rocha, nonetheless, he who stood “toe-to-toe” with one of the All-Time-Greats of jiu-jitsu, whose natural weight is 3 divisions above that of Vagner. In fact, if there were decision wins at BJJ Bet, Rocha would likely have stolen the victory for his work near the end.

85KG GI (match of the night)
– Marcos “Petcho” Martins def. Servio Tulio via choke from the back