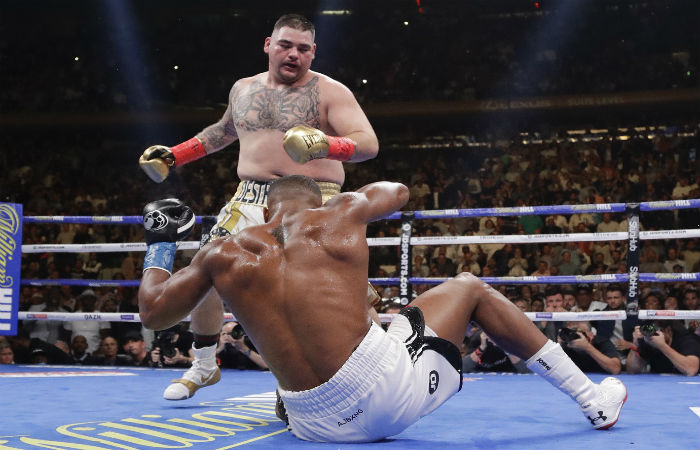 Arum, who promoter Ruiz until 2018, couldn’t’ believe what unfolded before his eyes as AJ went down four times at Madison Square Garden.

Actually, Joshua initially dropped Ruiz… but was caught on the way in attempting to finish the job.

The Briton lost four versions of the world heavyweight title.

“I’ve seen Anthony Joshua fight before, and it looked like there was a different guy in the ring”, Arum started.

“I mean, I don’t know whether he didn’t train hard for the fight. I can’t figure it out.”

“Nobody knows Andy Ruiz better than us. Apart from the Joshua fight and the one before, we promoted every one of his fights.”

“He’s a gutty guy and he’s got fast hands, but he’s still ponderous on his feet and he doesn’t punch hard. So, I don’t know what the f** was I watching.”

Questions on Joshua’s mindset began immediately as strange occurrences during the build-up and inside the ring overshadowed the fight.

Delaying the ring walk, chewing on his gumshield and looking nervous were all out-of-the-ordinary for a Joshua event.

“Yeah, something was wrong. Something I can’t figure out. I mean unless he was caught off guard.”

“You switch opponents on a guy. First, he’s fighting this big heavy guy in (Jarrell) Miller. And now he’s not fighting Miller, he’s fighting Andy Ruiz – who is barely a top ten guy. So he probably took his foot off the gas,” he pondered.”