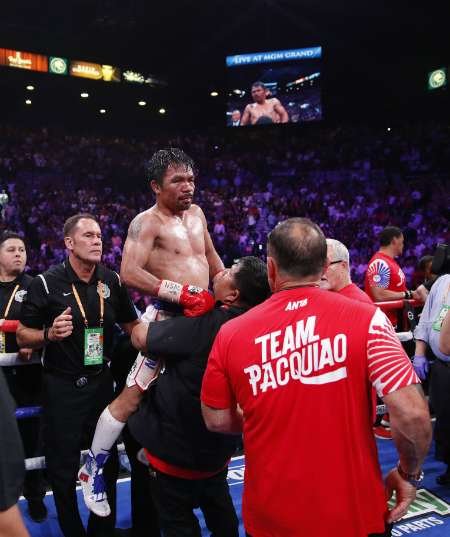 On Saturday, Bob Arum turned 88 years old. On Wednesday, he hit Madison Square Garden for the press conference to hype this weekend’s slate at The Mecca. In between, it is safe to assume, he maintained the same level of energy, enthusiasm and spark that continues to blow away fight game players.

Terence Crawford (35-0, 26 KO) puts up his WBO welter crown, against Lithuanian Egidijus Kavaliaskaus (21-0-1, 17 KO), age 31. The 32-year-old Nebraskan told media he didn’t want to talk about fights that might be made after this one. No PBC/other side of the street questions, he asked.

He seemed to be in typical condition, looked lean and relaxed, and he had no bad blood, honest or fabricated, with the challenger.

So it was left to Arum to provide spice and color, by and large. Teofimo Lopez proved charming, and seems to be back on track after sorting out his new family dynamic after getting married. He and IBF titlist Richard Commey (29-2, 26 KO) were also cordial, no hint of simmering hostility in play. But, Lopez (14-0, 11 KO) said, he will look to hammer the Ghanaian boxer Saturday, and he expects Commey to try to do the same to him.

Mick Conlan (12-0, 7 KO) and Vladimir Nikitin (3-0, 0 KO) renew acquaintances after rumbling at the 2016 Olympics. They, too, kept composed and professional at MSG, as Crystina Poncher lobbed queries at all the principals.

And Arum, he took press questions and responded with the mood mashup of a Brooklyn-born Las Vegan. Here are some Arum tidbits from Wednesday:

—Arum said he thinks Tyson Fury beats Deontay Wilder when they scrap in February, because Fury will be able to avoid one of those nuclear launches. He said he thinks yes, maybe a trilogy would be called for, but let’s see how this one plays out.

—Arum says he didn’t fault Joshua for winning the way he did, but that doesn’t grow his stature. He thinks Wilder would KO AJ and Fury would decision him.

—The promoter said “Ruiz really disgraced himself and really hurt boxing” on Dec. 7. “To come in like he did, fat and out of shape like he did, is a disrespect to the sport of boxing.” Arum said he and his team were happy for Andy on June 1, “because he had fought all his fights for us” and he was a “charming, nice kid.” But he was irresponsible and “where were the people around him?” People needed to spirit him away and not let him keep partying, he stated.

—He said he knew and George Foreman knew, that when Ruiz stepped on the scale “he had no chance. It was Buster Douglas redux.” This has been going on for ages, guys having too much fun after winning a crown. A Roberto Duran liked to eat and have fun, but he still had to make weight. In the heavyweight division, that lack of a meaningful weigh-in can mean that guys are more likely to go off the rails.

—AJ will have to fight Kubrat Pulev and Oleksandr Usyk, and let’s see who is standing after that. Arum says he sees Wilder as the champ if he wins, and Fury is “da man” if he beats the Alabama boxer. “If I had to bet, I don’t think Joshua will be around (in 2021),” because Pulev and/or Usyk could finish him, he told press.

—Arum restated his declaration that he and Al Haymon had agreed to make an Errol Spence vs Terence Crawford bout. But, he said, he thinks that maybe a fight against Shawn Porter, last seen going hammer and tong with Spence before Errol’s car crash, could get made. He thinks Spence won’t be around as an active fighter for awhile. Danny Garcia is a bit less interesting to Arum, for a Crawford vs Danny bout, in his mind.

—”Leave Pacquiao alone, he’s an old man,” Arum said, when asked about matching Crawford against Manny Pacquiao. That is not a competitive fight, he declared, even though Manny is still a great boxer.