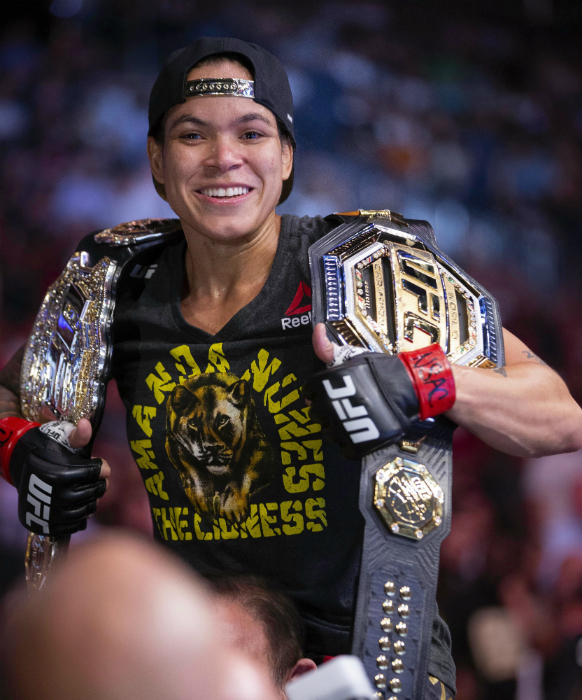 Germaine de Randamie  has learned a lot from her first fight with Amanda Nunes six years ago.

Beyond the fact that was the last time the former UFC featherweight champion ever tasted defeat, de Randamie is honest enough to admit she was ill equipped to deal with a complete fighter like Nunes when they clashed back in 2013.,

“First of all, six years is a very, very long time,” de Randamie said when addressing the rematch during the UFC 245 Athlete Panel Q&A on Wednesday. “I’ve said it before in interviews, I’m very thankful for Amanda. She gave me the best lesson ever.

The fight ended just before the four-minute mark of the opening round, so de Randamie and Nunes didn’t get to a full 15 minutes to test each other. But there was still a lot to take away that night.

As tough as that loss was, de Randamie admits there was one major takeaway from the first meeting that will assist her in the rematch this weekend.

“I think the most thing I learned about it and the thing that will happen Saturday is she’s not going to stand with me,” de Randamie predicted. “She’s going to shoot on me.”

As a kickboxing veteran who famously faced off with men in past fights, de Randamie definitely has the striking credentials to make anyone fear standing and trading with her on the feet.

But Nunes said don’t count her among them. The reigning two-division UFC champ scoffed at the idea that she would wrestle in order to beat de Randamie. But she did promise to show off every weapon in her arsenal to ensure she gets the job done.

“I know I’ll be able to strike with her. I know I believe I can knock her out. I know she’s very good what she has with her striking but I already see a lot of holes. We know each other very well. This is my second camp for her and I know I’m going to finish her.”