Chael Sonnen recalls fighting GSP ‘in a basement’ back in 2014 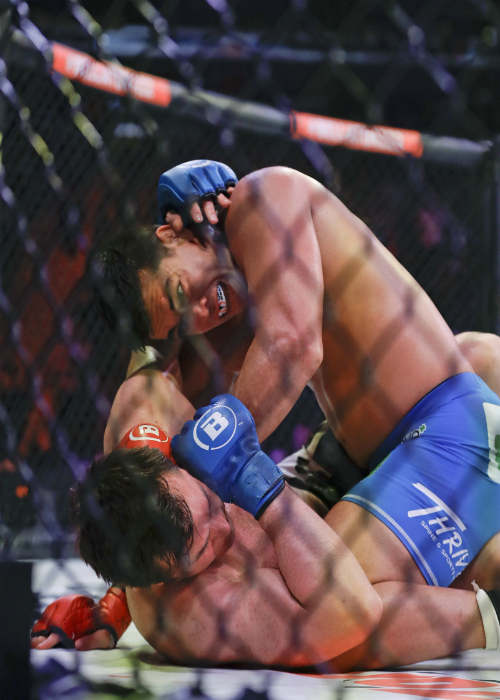 As Bellator 234: Kharitonov vs Vassell gets ready to go in the city of Tel-Aviv, Israel, there have been some minor developments in another popular fighting field – war – that threaten to collide with the scheduled MMA event. Hundreds of rockets and missiles were launched from Gaza this week by the Islamic Jihad terrorist organization – the bulk of them landing a few dozen miles south of the location – with a few actually reaching Tel-Aviv on Wednesday. Without going into who fired at whom first, in the middle-east, on an MMA website; this flare-up has followed two years of gradual escalation involving all sides—Israel, and the various factions in Gaza. Closer to the Gaza border, a mass event such as Bellator’s would be cancelled by local authorities (on account of the current metallic rain) but the Jihad – perhaps MMA fans – so far seem to be largely leaving Tel-Aviv alone, for this round.

Chael Sonnen, recently retired from professional fighting, is now at the Sheraton Tel-Aviv hotel, in the glass-walled lobby floor overlooking the Mediterranean. The ceremonial weigh-ins for the Kharitonov vs Vassell event have just wrapped up in the conference room below, with Sonnen taking a small part in it—as a teammate for Austin Vanderford, and on promotional duties for the Bellator organization. Bellator is not new to Israel – mid-November in Tel-Aviv is becoming a tradition for them – but it is Chael Sonnen’s and his wife Britanny Smith first time in the state.

You landed here pretty much along with the missiles. It doesn’t bother you. Or does it?

Mmm, I’m not crazy about it! I don’t love the missiles, no.

Have you heard any sirens?

Yeah, my wife and I were having breakfast and the sirens went off. And I didn’t know, I thought maybe that was a regular thing—everybody around seemed pretty calm. And then some Israelis told me, ‘No, the last time that happened was 3 years ago.’ So, everybody went on about their day like there was nothing to be worried about, so my wife, we did too.

It is only missiles.

Frankie Edgar. I think he’s going to go to 135, he said, and try to make a title run down there. I like him as a person, I like his style, I’ve always enjoyed it. I like that he changes weight classes, takes on anybody.

Yeah, I’ve got a teammate so I’m a little bit biased; Austin Vanderford. [In Tel-Aviv with his wife, UFC fighter Paige VanZant, who seems on vacation as he rests in preparation to take on Russia’s Grachik Bozinyan on the main card.]

I’m also curious to see how Linton [Vassell] does, quite frankly. I like Linton at heavyweight. I thought he’d be a small heavyweight, I saw him a couple of days ago, he said he was weighing 240 pounds, so, I think the narrative about him being too small is just not true, it’s wrong.

And Sergei [Kharitonov] is just such a good striker. I thought for many years that Sergei was the best heavyweight striker in the sport. I always thought Sergei versus Junior Dos Santos would be such a fun fight.

UFC 148 Weigh In
Photo by Josh Hedges/Zuffa LLC/Zuffa LLC via Getty Images
In your fighting days you famously fought some killers. Who was the most awesome killer among them, you think, Anderson?

Mmm, no, maybe. I’ve fought Georges St. Pierre in a basement, in California, 2014. That was the best fighter I’ve ever taken on. It’s a long story, but Kenny Florian set up the workout. And he said, ‘Hey, Georges is in town, do you want to work out tonight?’. And I said ‘Yes.’ But, I didn’t know he meant GSP—everybody calls GSP, GSP. Kenny sent me a text that said ‘Georges is in town’.

Anyway, that was it. I showed up at the basement and there is St. Pierre. And I do remember leaving that day and thinking, ‘You know, that guy is special. That guy is different than other people.’ And he had that strength, like that remarkable strength. And I never heard his opponents talk about that. I never heard his opponents talk about how strong he was, which surprised me, because it was… remarkable. Very strong man.

And as nice as he is strong.

Yeah, I would agree with that.

And in the cage, is there one, or a few guys in particular you’d want to tip your hat to?

There were some really good fighters—Paulo Filho comes to mind. He was a great fighter.

In those days, with Paulo Filho, you had a lot of words about Jiu-Jitsu. And about how Wrestling is superior and is the best base for MMA. Years later, that changed.

I’m a Jiu-Jitsu black belt. I believe in Jiu-Jitsu. I haven’t wrestled in a number of years, I only do Jiu-Jitsu. I think very highly of Jiu-Jitsu. But the fact is, though, that is in a second tier; it’s a much easier sport. Tough guys would go into wrestling. If you’re not as tough, you’d go to Jiu-Jitsu. That’s just the truth.

If you’re the toughest you’re going to Judo. Those guys are tough.

I suppose if you look at that from that regard it’s a good point, that’s fair point.

But, so, you say wrestlers are the toughest.

Chael Sonnen during the Bellator 234 ceremonial weigh-ins at the Shearton Tel-Aviv, Israel
Chael Sonnen acting out brand ambassador duties at the ‘Bellator 234: Kharitonov vs Vassell’ ceremonial weigh-ins at the Sheraton hotel, Tel-Aviv, Israel Bellator MMA (PR)/Lucas Noonan
You had some trouble of your own with commissions – what do you think about USADA these days? Is it too much?

I feel like USADA has really done a good job, and I feel like they’ve also been very fair; there’s very few organizations who could get something wrong, and then come and admit: ‘We got it wrong.’ And USADA has done that a number of times, and I think that shows integrity, and I think they get a little bit of a bad rap. Just because of the way it’s set up. I mean, they’re the judge, jury and executioner and that’s not a fair system. And I think they’ve got, you know, they’ve got a light shined on that, but it’s still the system. They do their due process and they’re not afraid to admit that they’ve one wrong, I think that’s got to mean something.

As long as we’re on possibly controversial topic – Dana White recently commented on this – do you have anything to say about Conor McGregor’s recent allegations regarding sexual assault? What it means to the sport, if you think it will do anything to the sport at all?

I will tell you: I don’t know anything about it. I got that story very late, apparently that have been going on for a while in tabloids, I never even heard about it, and Dana [White] spoke about it—that’s really all I know. Is Dana said he’s talked to Conor, Conor says ‘it’s not me.’

Mr. Sonnen, Thank you for your time.

Thank you, enjoy the event.