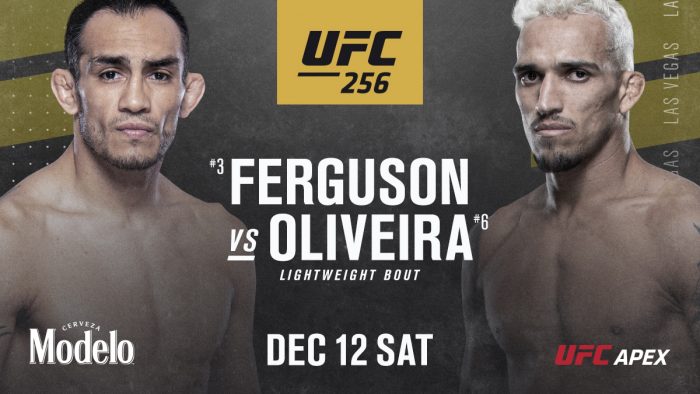 With eight wins in a row including a dominant performance over Tony Ferguson at UFC 256, Charles Oliveira is ready for his title shot.

The Brazilian was masterful in the co-main event as he put Ferguson on the ground repeatedly and nearly snapped his arm with a submission in the opening round. Oliviera was impressed with Ferguson’s will to survive but there was no doubt about the winner after the final horn sounded.

“He’s a really tough guy,” Oliviera said about Ferguson at the UFC 256 post-fight press conference. “I even told [my coach Jorge Patino] after that first round that I thought I had broken his arm.

“But I wanted to win. We had a game plan set and I wanted to go in there and win at any cost.”

Now that he’s secured the biggest victory of his career, Oliviera is staring at a top-five ranking in the lightweight division with a title shot finally in striking distance.

While a showdown against reigning champion Khabib Nurmagomedov would almost certainly be on his wish list, Oliveira doesn’t believe the undefeated Russian will return to action after announcing his retirement earlier this year.

For now, Nurmagomedov is still holding onto the title but Oliveira expects a new lightweight champion to be crowned in the near future and he’s got the perfect fight in mind to help the division move forward.

“Khabib swore on his father’s grave that he wasn’t going to come back,” Oliveira said. “When a man does that, I don’t think he’s going to come back. [Justin] Gaethje can go fight whoever. But I want the winner of Conor [McGregor] and [Dustin] Poirier.

“I have eight wins in a row. Seven of those, I finished the fight. I don’t let it go to the judges’ hands. I finish fights. I’m in the position to be fighting for the belt.”

At UFC 257 in January, Conor McGregor will return to face Dustin Poirier in the main event after they previously met at featherweight back in 2014. On that night, McGregor scored a devastating first round knockout but six years later Poirier is looking to exact his revenge.

No matter who comes out on top, Oliveira believes he should face the winner with the lightweight title going up for grabs in that fight.

“I don’t really think there is a preference,” Oliveira said. “I want to fight for the belt. That’s been my dream and my team’s dream. Obviously fighting Conor involves a lot of other things. It’s a lot of money and a lot of other things that maybe a fight with Dustin wouldn’t involve but we really want to win the belt. It really doesn’t make a difference.”

Oliveira’s desire to face either McGregor or Poirier runs so deep that he’ll even consider serving as a backup for that main event if the UFC needs him.

“I just have a cut over my eye,” Oliveira explained. “So next week I’ll be fine. I haven’t lost a fight since Paul Felder and I was in the gym a week after that. So, Dana [White] just call my manager if you want me to fill in.”

Considering the heights he’s now reached in his career, it’s tough to remember when Oliveira was 2-2 with one no contest at lightweight after joining the UFC roster in 2010. It’s not quite the same distant memory but Oliveira also spent a lot of time fighting at featherweight where he was constantly depleting his body in a losing effort to compete at 145 pounds.

Following his win over Ferguson Saturday night as he notched his eighth consecutive win, Oliveira held up a stone and he later explained the significance of that rock when relating to his own arduous journey in the sport.

“Everybody knows that I’m religious. I have a lot of faith in God,” Oliveira said. “My dad climbed a hill and if you know the story of David [and Goliath], you know what that rock means.

“So that rock is from that hill and God is the most powerful force there is.”