Claressa Shields: Fight with Nunes would be one of the biggest in boxing history 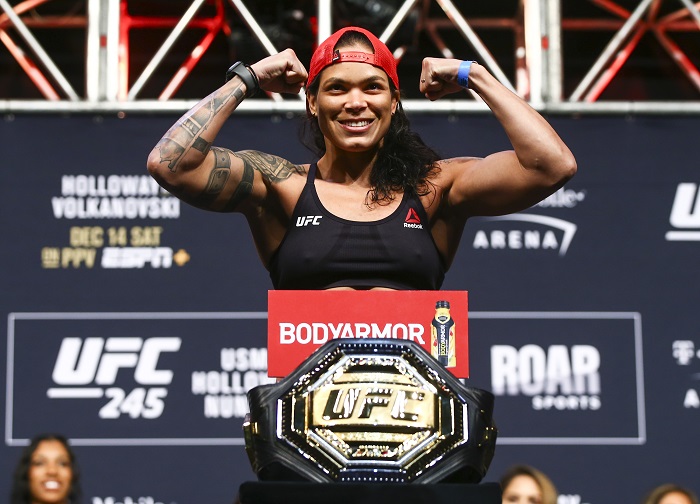 Claressa Shields thinks a boxing match with Amanda Nunes would be one of the biggest in the sport’s history.

Shields and her manager have been in talks with UFC president Dana White on potential crossover fights.

“You know what he (White) said, he said that Amanda would do anything,” Shields told reporters backstage at T-Mobile Arena. “She feels she’s – she is the GWOAT in MMA, and I’m the GWOAT in boxing. It would be one of the biggest matches in boxing history. I think that you’ve never seen two women who are young, in their prime, hungry and who just don’t want to lose so I think that me and her facing each other, would be one of those fights that people really see fireworks and stuff like that.”

Nunes didn’t seem too keen on boxing Shields, and in her UFC 245 post-fight press conference, said if Shields wants to fight her, she should come to her world.

“Of course for me, boxing is my passion, I would love to do it in the ring but, I’m also a fair person. Like I’m fair game, if she comes to my world, I’ll be more than welcome to come to her world.”

I’m Undisputed! 9-0, 24 years old ! I go to bed at night smiling about it! Some of y’all sick about it, but like I said don’t doubt me 😈✌🏾GWOAT pic.twitter.com/ueml7nOkG4

So Shields expects to face Nunes in a boxing match sometime mid-2020, followed by an MMA fight a year later.

“Mid next year, end of next year, MMA match can happen a year after that,” Shields said.

“It’s just about whenever we get a deal signed and sealed then let me know how much time I have to get ready to get inside the octagon and I’m not talking about six months, or a year but give me like actual time where I can have a chance – I feel like I have a chance now but once we go to the ground and stuff, I have to learn that, and I know that. Me being an olympic athlete, I know that I can learn different – a different sport and catch on quicker than just a regular person.”