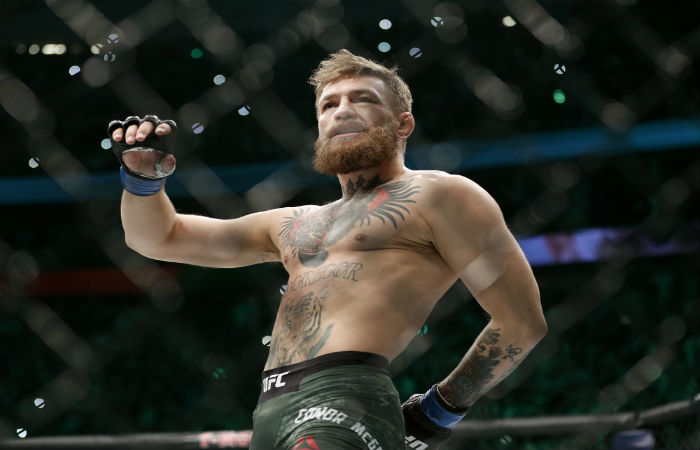 Conor McGregor is obviously ready to fight again after taking aim at both lightweight champions following UFC 249 this past Saturday night.

The Irish superstar took to Twitter on Monday where he blasted new interim champion Justin Gaethje as well as former opponent Khabib Nurmagomedov in a series of volatile messages.

After rumors swirled for months about a potential fight between them, McGregor unleashed on Gaethje after he earned a fifth-round TKO to stop Tony Ferguson to win the interim title. Gaethje called for a fight against McGregor for months but the matchup never came together.

Now it appears McGregor is ready to make it happen as he seeks to become lightweight champion for the second time in his UFC career.

“Justin, there is no danger in a man that hugs legs, we all know,” McGregor said. “Try and dance around what the real threat is here all you want.

“I am going to f*cking butcher you. Your teeth. I’m going to put them on a f*cking necklace. Speak on my skills as a father? You are f*cking dead.”

Back in September 2019, Gaethje responded to a comment from McGregor on social media while calling him a “sh*t human, father and husband” and apparently the former two-division UFC champion never forgot about it.

McGregor’s tirade continued by declaring his intention to fight Gaethje next despite plans by the UFC to book him against Nurmagomedov in a title unification bout later this year.

“Don’t ever say you represent the great nation of the United States of America ever again,” McGregor said towards Gaethje. “No true American would speak so highly of, or allow, a convicted member of a Jihadi terror cell represent them. Never forget! You are a f*cking blind fool, and I am going to finish the job.

“It’s me and Justin next as Khabib is the biggest bottle fighter in the game. Guarantee it.”

Nurmagomedov didn’t escape McGregor’s ire either as he also blasted his former opponent, who was originally scheduled to compete at UFC 249 until travel restrictions due to the coronavirus pandemic prevented him from traveling to the United States.

“Khabib you absolute embarrassment,” McGregor said. “Scurrying, hiding rat as usual. As I have said many times. As has been seen many times. Through the pane of glass it was confirmed what was always known.

Just before turning his attention to Gaethje and Nurmagomedov, McGregor also commented on Ferguson’s loss this past Saturday night while also playing matchmaker for the lightweight division.

“I love Tony. We represented him amazingly at Paradigm sports and were betrayed for a promise of a baseball contract,” McGregor said. “But frame and preparation here was just embarrassing. His methods and conversation are humorous/enjoyable but he was never the level perceived. Although tough.

“It is Dustin [Poirier]/Tony next when Tony heals. If he does. Dustin will beat him also if changes are not made. Which they won’t. Dustin, although game, and in the mix, will be fed to the floor again. Couple wins here/there then folded in half. Rinse and repeat – Dustin career.”

After erupting on the top fighters in the lightweight division, McGregor then announced that once he runs through all of them, he’s moving onto a different weight class.

“After this division demolition job, it is 170 pounds,” McGregor wrote while teasing a permanent move to welterweight one day.