Crawford: I’m in a good place in my life right now 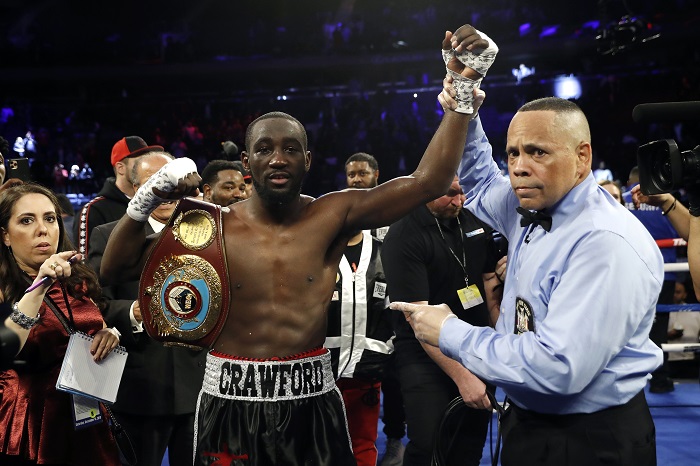 Besides the main event, Crawford also watched with interest when fellow welterweight world titleholder Errol Spence Jr., who was ringside, was brought on for an interview earlier in the broadcast.

“I think it could happen. We have to see how it goes,” Spence said. “(Manager) Al Haymon and (Crawford promoter) Bob Arum need to sit down, and for Bob to stop lying. We’ll see. It definitely could happen next year. We just have to sit down and talk and go over the numbers and things like that.”

Then Spence added something that really got Crawford’s attention.

Soon after, Crawford tweeted his response to Spence’s demand for the larger share of the purse.

“And they said it was me. I rest my case now, on to the next. That chapter is now close,” Crawford wrote.

Crawford said he was not at all offended by Spence’s remarks about the purse split or the derisive comment that he should take “whatever we give him.”
In fact, Crawford laughed when reminded of Spence’s comment. Is he desperate for the fight?

“Hell, no. I’m in a good place in my life right now. I’m having fun with chilling out, having kids and enjoying my kids,” said Crawford, whose wife gave birth to their sixth child, a girl – Trinity Michele Crawford – last week. “I don’t worry about things I can’t control. I mean, like everybody always got an opinion and I just a laugh at a lot of people’s opinions that said I haven’t fought anybody.

“I just laugh like this guy, he’s on his high horse. Maybe that wreck knocked a couple of screws loose.”