Donald Cerrone: ‘Younger me would have quit’ against Al Iaquinta at UFC Ottawa 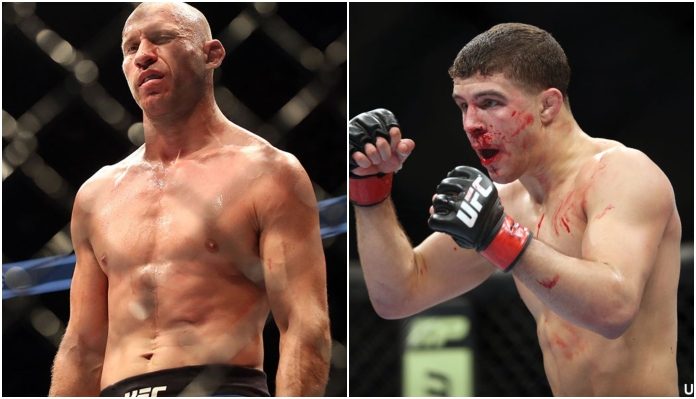 Slow starts are nothing new for Donald Cerrone. In the past, they’ve occasionally proven costly, but that wasn’t the case on Saturday night.

In the main event of UFC Ottawa at Canadian Tire Centre, the 48-fight veteran erased a sluggish first round by going on to batter and bloody fellow lightweight slugger Al Iaquinta for the next four rounds en route to an exciting unanimous decision win.

The fight looked to be fairly even after the first five minutes, though from Cerrone’s perspective, he seemed doomed to put on a stinker of a performance.

“Thank God it’s been 41 fights in Zuffa that I’ve been here because I was able to, like, fake it ‘til you make it, ‘cause you fake it long enough and you find it. In the second round it was like, there it is and let’s go to work. It’s just tough, because I think the younger me would have quit. It’s just crazy, there’s like memes out there of lions with little cubs saying, ‘I would have quit until I realized who was watching’ and it was like, yeah, motherf*cker, let’s go.”

Cerrone was referring to his own prized cub, his son Dacson Danger who was ever-present during fight week. That’s one difference in Cerrone’s life and fatherhood has perhaps not-so-coincidentally lined up with his current three-fight win streak.

While Cerrone gave plenty of credit to Dacson for inspiring his performance, he acknowledged that nothing might have helped him if Iaquinta had chosen to push the pace in round one.

“The Cowboy you get is a crapshoot,” Cerrone said. “If it was Al, he had my number, he should have just f*ckin’ turned it on in the first round because I was lost. I don’t know where I was, but I wasn’t in the fight.”

By the end of the fight, Cerrone had prevailed and Dacson joined dad in the cage following the win. Cerrone is hoping to start building memories with his son already so that the two can have something to reminisce about down the road.

“It’s so cool for me to have him be here and be like, ‘Man, that was my dad,’” Cerrone said. “To me, having all those accolades they throw down on the screen like, ‘most in UFC history,’ having his dad be the baddest motherf*cker to ever do this. That’s cool. I think that’s cool.

There are already plans to expand the Cerrone clan and the 36-year-old revealed that he is still hoping to have a daughter (her name? “Wyatt Jo”), but for the more immediate future he is set on making another run to the title. Four years ago, Cerrone rode an eight-fight win streak to a title bout with Rafael dos Anjos, but he was dispatched in a little over a minute. Cerrone went on a 6-4 run at welterweight after that but has since returned to lightweight and won two straight fights in that division.

Asked if he’d be interested in fighting UFC lightweight champion Khabib Nurmagomedov or interim champion Dustin Poirier, Cerrone expressed an interest in both as well as a long-rumored matchup with Conor McGregor.

“My name’s in the hat for [Nurmagomedov or Poirier] for sure if one of them fall out. But like I said, I left here [ranked No. 2 at lightweight] and I didn’t go anywhere,” Cerrone said. “So people ask me where should I be ranked, I don’t care about ranking. I should beat these guys, I feel like I’m the best in the world. I feel like that’s where I belong and for the UFC not to give me a title shot, I would step back and I would be thoroughly disappointed. Like, wow, a guy who’s done all this for the sport, I don’t trash talk, I go in there and I deliver every time and you’re going to overlook me for somebody else. I’d be really upset like, wow, that’s the company work for?

“Which I’m not saying is gonna happen by any means. To me, I’d really be thrown back; on the flip side, if Conor wants to fight, f*ck yeah, let’s go. Especially in July, I’m ready, let’s turn and burn, baby. … Who knows? I’m gonna be sittin’ at home in a couple of months, bored, like, ‘F*ck. Fine. I’ll fight whoever, let’s go.’ But I love it.”