Douglas Lima believes he can beat anyone in the UFC 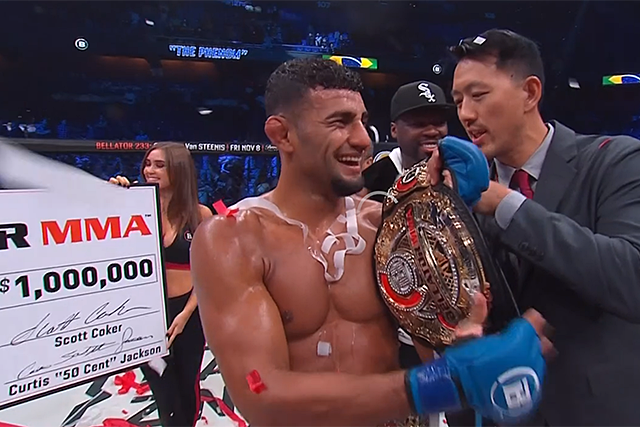 Without a shadow of a doubt, Bellator’s welterweight champion Douglas Lima (32-7) is one of the finest fighters in the welterweight divisions.

The 31-year-old Brazilian is widely regarded as a guy who can control the fight anywhere – standing, on the ground, near the cage and etc. Recently Lima won the Bellator welterweight belt for the third time in his career, making his case for being the best welterweight ever.

Still, there are people out there who believe that if you’re not fighting under the UFC banner, then there’s no way you’d be the best.

It seems ” The Phenom” is not feeling those people and once again stated that he can do a lot of damage to anyone in the UFC, including Kamaru Usman.

“I consider myself one of the best,” Lima told MMA Fighting.

“I’ll fight anyone in the division no matter where they are. I believe I’d beat any one of those guys in the UFC. Rankings are complicated, anyone has their opinion, but seeing that many consider me the best excites me even more.”

Bellator has been very open about co-promotions recently, but “The Phenom” doesn’t expect UFC president Dana White to approve of such a move with a rival company.

“I can’t really know if I’m the best or not, because the UFC is out there, and there’s no way we make this fight happen,” Lima said. But I know I’d beat anyone there. All I want is for the UFC to do co-promotions too, but I’m sure it will never happen.

“It would be a dream for me to prove. Many people say you don’t deserve to be considered the best if you don’t fight in the UFC, but that’s something I would like to prove wrong with a superfight. Who knows. Maybe they’ll change their minds in the future under the new ownership. It’s important to know who’s the best. I can fight there, or they can fight here.”

“I would choose the one who’s considered the best. Usman is really tough, has good wrestling, so I wouldn’t think twice before choosing him. It would be a big fight.

“He’s on a roll, (and) he’s breaking everyone, so it would be a good fight for me, even if his style doesn’t favor me. I had problems with wrestlers in the past, and he has good wrestling. But I’m evolving, (and) I’m feeling great. I don’t think too much about it, but it would be great if that happened.”

And how would that superfight end?

“A knockout, right? For sure,” Lima answered. “I’d go for the knockout. He has knockout power, but he usually wins by decision. I believe we would eventually find that chin.”