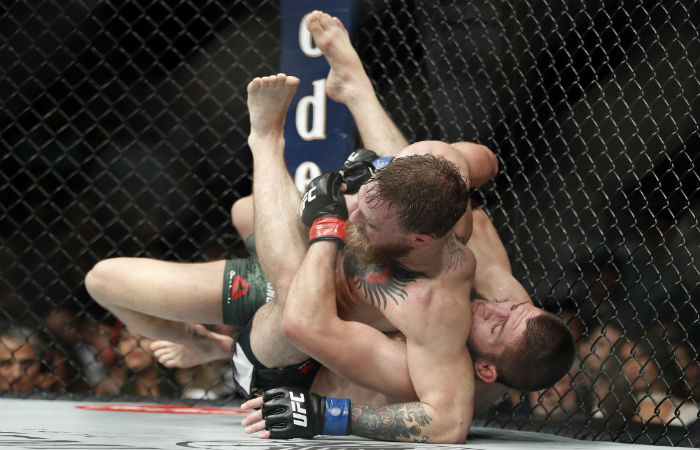 UFC lightweight champion Khabib Nurmagomedov (28-0) absolutely smashed Conor McGregor at UFC 229 and until “The Notorious” proves himself a worthy of a rematch, “The Eagle” is not interested in him.

“Honestly I don’t think he wants that fight,” said Nurmagomedov.

“How is that so? I beat him up for four rounds. I beat him and choked him and he tapped. It was a sign he didn’t want to be there, ‘let me go please’ and all that. And now he wants the rematch.

Khabib cites McGregor’s inactivity as a key factor for not considering another bout with “The Notorious.”

While Nurmagomedov isn’t the most active fighter on the UFC’s roster, McGregor has not been competing as regularly as when he rose to fame, seemingly focusing on side-activities like his whiskey brand.

”First of all, he has to earn another title shot. We’re in the fourth year since his last victory. It’s been three years and now we’re in the fourth. In order to fight for the title, I had to win 10 fights in a row in the UFC. That’s not counting the 16 victories I had outside the UFC. In every fight, I earned it not with my mouth but with my actions. That’s where we’re different — he talks about it, I just do it.”

Nurmagomedov also thinks that McGregor’s star is fading, with more and more fans becoming tired of McGregor’s antics outside of the cage.

Until McGregor has proved he is worthy of another title shot, Nurmagomedov says he will not pay attention to “Idiot” McGregor’s urge to fight him:

“It’s nice for me, because even when I keep quiet and even when I don’t say anything people can weigh it up for themselves,” Nurmagomedov continued about McGregor. “Hang on, this guy talks and this guy just acts’. Just talking is one thing, but when it comes to doing it, he’s completely different.”

“So for me, there is no kind of announcements or insults. He’s an idiot. We don’t pay attention to idiots.”

Nurmagomedov is rumored to fight Tony Ferguson in early 2020 and McGregor is in talks about January showdown with Donald “Cowboy” Cerrone.