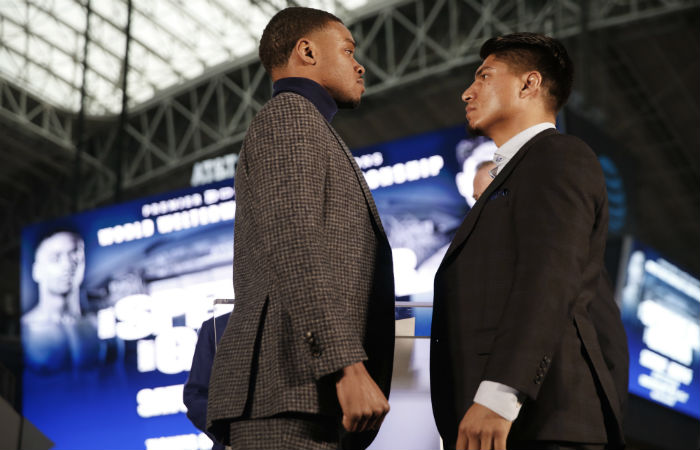 We are just two days away from the biggest boxing event in 2019 so far. Saturday night the WBC world lightweight champion Mikey Garcia (39-0-0) will try to get Errol Spence jr.’s IBF world welterweight title.

The venue, AT&T Stadium in Dallas is ready for the showdown and so are the two undefeated fighters.

Spence Jr. (24-0-0) is about to defend his belt for the third time in his career and if “The Truth” manages to get the W, he thinks that will solidify him as the number 1 pound-for-pound boxer in the world:

“At the end of the day, they called me out, so they obviously think they see something in me that they are going to win the fight. I like a fighter that is as confident as I am. Like I said at the other press conferences, I hope you keep that same energy that you have had outside the ring, inside the ring too,” the 29-year-old said.

The WBC lightweight champion is without a doubt up against his toughest challenge of his professional career. The 31-year-old has the experience on his side, but from a physical standpoint, it’s advantage Errol Spence. Garcia seemed unfazed by the size difference and he believes his training camp prepared him mentally and physically for the test.

” If I get to hurt my opponent, drop him and hurt him and possibly take him out, I’m definitely going to jump on him. If we get to stop the fight early, even better for me, I come home much sooner. Saturday night he is going to find out why I picked him, why I chose this fight. All my other opponents, they don’t see anything flashy, they don’t see anything special but when they get inside the ring they realize I am special in a different way,” the lightweight said.

“It’s the same attitude I have always had. I am confident in my skills and my abilities. I know what I can do. I know what I got to do on Saturday night.”

“I definitely do have to fight the best fight of my life. If I don’t then I can’t overcome the challenge. This is a huge challenge, a big fight. It’s not easy to do what I am doing, not many are daring to do what I am doing. And that’s why I chose this fight. I want to make history and in order to accomplish that I need to fight the fight of my life and you will see the best of me on Saturday night,” Garcia stated.