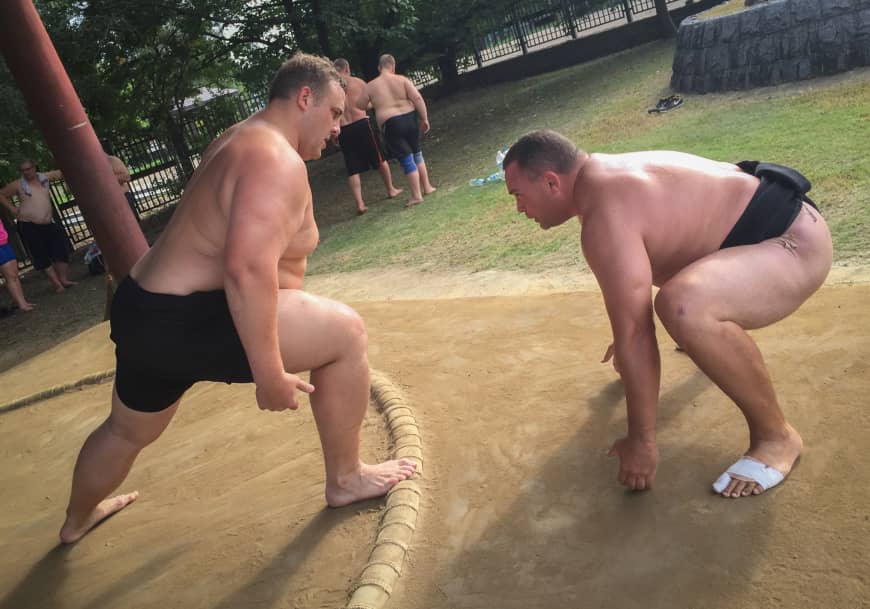 What do Baruto, Dejima, Kotomitsuki and Goeido have in common besides being ozeki who have won championships?

The answer of course is that all four men have competed in and won medals at amateur sumo tournaments.

That’s not a significant fact in and of itself, as many top-division wrestlers found success at the amateur level before making the jump to the professional ranks.

With Baruto, though, there is one notable difference — he is doing it post-retirement.

The massive Estonian, who has, by turns, been a farmer, tourism ambassador, MMA fighter and actor, since hanging up his mawashi (belt), obviously missed the lure of the dohyo.

Although six years retired, the 198-cm former Emperor’s Cup winner will be a hot favorite to win gold in Tallinn, Estonia, in April.

It would be a mistake to think he won’t have competition, however.

Russia is the overwhelmingly dominant power these days but wrestlers from Ukraine, Germany, Bulgaria, Hungary and Poland have also been world champions.

Indeed, the most recent European championship had 154 entrants, including several multiple-title winners in judo and wrestling as well as sumo.

The pool of sumo talent in Europe is arguably as deep as it has ever been and the sport there is growing.

That’s a far cry from just five years ago, when sumo’s future on the continent seemed in serious peril.

A schism between east and west in 2012, which resulted in dueling governing bodies and championships, threatened to destroy all the work that had gone into developing sumo in Europe over the previous 20 years.

Dissatisfaction with the state of the sport had escalated into open bickering as tensions rose between several powerful figures who had dominated the sumo landscape for years.

The straw that broke the camel’s back, according to current European Sumo Federation General Secretary Riho Ranikmaa, was the election of Petar Stoyanov to president of the existing governing body.

At the time, Stoyanov was under criminal investigation, and in 2012 a Bulgarian court sentenced him to life in prison for being part of a gang that carried out multiple contract killings as well as beatings, bombings and arson.

Ranikmaa, along with Ukrakian Sergii Korobko, led a breakaway faction from the European Sumo Union and formed the ESF.

For a while both groups claimed to be the legitimate governing body for the entire continent and continued to send out communiques to all national federations.

Things weren’t all plain sailing with the ESF, however, and Korobko was forced out amid accusations of financial irregularities.

Most western nations chose to stay with the ESU, while the eastern countries sided with the breakaway group.

When the International Sumo Federation (IFS) switched recognition to the EFS and NHK sent a team to cover that group’s European championship in 2012 rather than the ESU event which took place at the same time, the writing was on the wall.

No longer part of IFS and without the continent’s best athletes, the ESU gradually faded away, and one by one the former ESU nations joined the ESF.

Sixteen countries “have regularly sent their sportsmen to the EFS championships and ranking tournaments,” according to Ranikmaa, while “18 counties are relatively passive, participating in the EFS events on an irregular basis.”

Not all countries in that latter group have accepted EFS leadership, despite being listed on the organization’s website, and lingering bad feelings over damage done to the sport by the split remains.

Asked what the ESF has done to mend fences, Ranikmaa said: “We are aware that some federations could be discouraged (by the) situation in European Sumo Federation during (the) presidency of Sergii Korobko . . . but (the) present Board of (the) ESF do their best to promote sumo . . . with transparent governance.

“(The) ESF tries to renew contact with members, which now (don’t) take part in tournaments.”

With the passage of time those, efforts have been increasingly successful. Italy and Switzerland have returned to the fold and Great Britain has announced its intention to rejoin its European neighbors.

Full IOC recognition for IFS, granted in October 2018, has heightened hopes that sumo may be closer to its professed target of becoming an Olympic sport.

If Baruto’s participation in the amateur game spurs other former stars of ozumo (professional sumo) to follow suit, sumo in Europe and elsewhere could attract much larger crowds and possibly even reach a stage where events are televised and get regular coverage in the sports pages.

The challenge now for the EFS is taking advantage of both that opportunity as well as an explosion of interest in professional sumo worldwide over the past 18 months.

With various media organizations seeing anywhere from a 200% to 600% increase in the numbers of viewers and readers for sumo content, there has never been a better chance for amateur sumo to finally make a serious breakthrough.