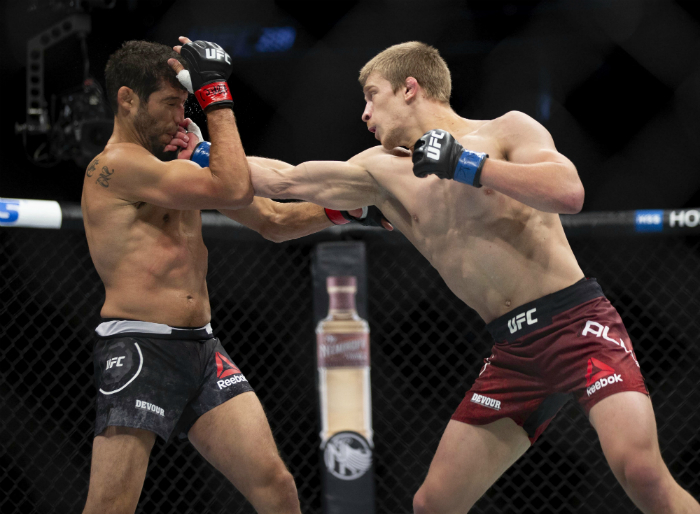 Gilbert Melendez has been released from his UFC contract.

The former two-time lightweight title contender exits the promotion off five straight losses dating back to 2014 with his most recent outing coming at featherweight in a unanimous decision defeat to Arnold Allen.

Sources close to the situation confirmed Melendez’s release from the UFC when speaking to MMA Fighting on Monday. The news of his release was first reported by FightBookMMA.

When Melendez joined the UFC, he was a high profile addition to the roster after he was a multi-time lightweight champion with Strikeforce.

He was granted an immediate title shot at then champion Benson Henderson but came up short in a razor-close split decision.

Melendez then returned with a win over Diego Sanchez in one of the best fights of 2013 after the lightweights slugged it out in a back and forth brawl over three rounds.

Following a coaching stint on The Ultimate Fighter, Melendez was then matched up for another shot at the lightweight title, this time against Anthony Pettis.

Melendez ultimately suffered a loss via second round guillotine choke submission, which was the first time in his career that he had ever been finished in a fight.

Four more losses followed the setback against Pettis including two attempts at featherweight after Melendez decided to make the move down to 145 pounds.

Melendez told MMA Fighting prior to his most recent outing that a lengthy break from the sport helped reignite his passion for competing again and he was excited to step back into the Octagon after nearly two years away.

“I do feel like everybody I’ve competed against, I competed against them at a high level. I had plenty of good moments. If we ran some of those fights back, I think it would be different,” Melendez said at the time. “I’m not getting knocked out over and over. In fact, I’ve never been knocked out in a mixed martial arts fights. I’ve only been submitted once.”

Things didn’t go his way that night and afterwards Melendez referenced putting more time into coaching and working with his team at the El Nino Training Center in California.

It’s unclear at this time if Melendez will seek a new fighting home or just remain focused on coaching in the wake of his release from the UFC.