Coach: Masvidal could ‘be very competitive’ against Canelo Alvarez 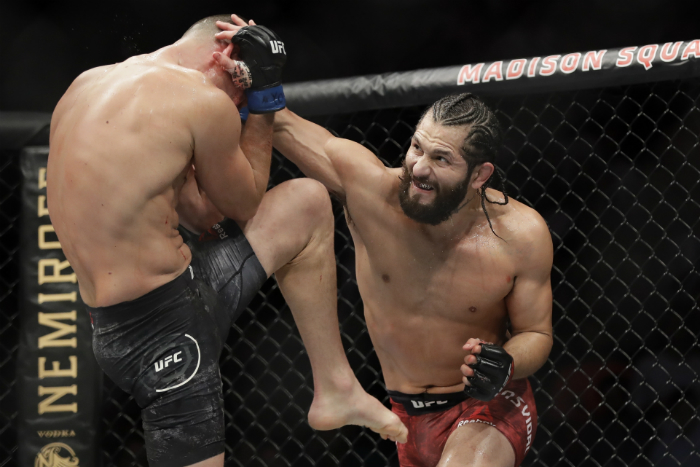 To prove he really is the ‘baddest motherf-cker’ in the world, newly-crowned UFC ‘BMF’ champ Jorge Masvidal wants to fight pound-for-pound great Canelo Alvarez in the boxing ring.

Speaking to reporters following his UFC 244 stoppage win over Nate Diaz, ‘Gamebred’ said he would like to break Alvarez’ face and beat the multiple-division boxing champ at his own game.

“I don’t know I’d like to break his face,” Masvidal said at the post-fight press conference. “Just fight, just test myself, make a lot of money for testing myself. But I truly feel I could make it 1-1 MMA versus boxing.”

While that might sound ludicrous to some, American Top Team (ATT) coach Mike Brown is confident in Masvidal’s ability to stand toe-to-toe with Alvarez and box for 12 rounds.

“I think he can be very competitive, and he can shock some people,” Brown told MMA Fighting on Tuesday. This is what he’s best at. He’s got maybe the highest fight IQ of anybody I’ve ever met. Boxing is where he’s most comfortable, (and) what he’s been doing the longest since he was a teenager. It comes most natural to him. He also has the ability to change things up and do wild and crazy things with unique footwork with things nobody has ever seen.

“I mean, he’s got an amazing [skill set]. I learn a lot from the guy. I learn things all the time. During camps when I’m training him, I’m learning new things, because he has so many other techniques and ideas that are new or different from what I’ve seen. It’s like exchanging information. I’m getting better all the time, too.”

Speaking of the McGregor-Mayweather fight back in 2017, Brown said he was surprised by how competitive ‘The Notorious’ was in the early rounds.

“I mean, maybe it was only because Mayweather was throwing those rounds away. Maybe. But he was competitive until he gassed. Jorge’s gas tank is much better than Conor’s.”

A boxing match between Masvidal and Canelo might make for some interesting discussion but, as of right now, Masvidal is expected to challenge the winner of the upcoming welterweight title bout between Kamaru Usman and Colby Covington at UFC 245. The PPV extravaganza will take place next month, Dec. 14 at T-Mobile Arena in Las Vegas.