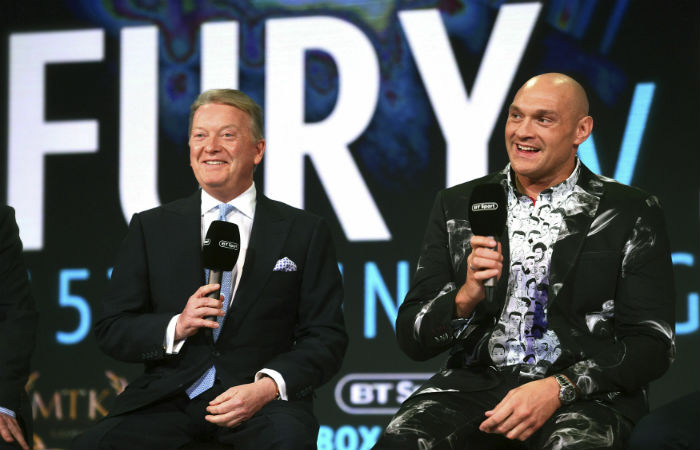 Warren’s winning bid, which was funded in conjunction with Fury’s other co-promoter, Bob Arum’s Top Rank Inc., was a record $41,025,000, nearly $9 million more than Matchroom offered for this high-profile fight between polarizing British heavyweights.

Queensberry and Top Rank offered an enormous amount of money for the right to promote Fury-Whyte primarily because Arum and Warren didn’t want their most popular, valuable boxer to perform on platforms other than ESPN and BT Sport, even for one fight. ESPN has an exclusive content partnership with Top Rank, as does Warren with BT Sport in the United Kingdom and Ireland.

Matchroom and DAZN, a worldwide streaming service, also are partners.

Fury-Whyte will be a pay-per-view event in the United States and in the UK. It is expected to be held sometime in April in the UK.

Bob Arum’s Top Rank Inc., Fury’s co-promoter, requested an 80-20 split at the WBC’s annual convention two months ago in Mexico City. Whyte, who already had sued the WBC for failing to enforce his status as its mandatory challenger, protested the 80-20 split because the Jamaican-born, London-based contender is convinced he is worth significantly more to the event than 20 percent.

Now that Queensberry and Top Rank have won the Fury-Whyte purse bid, it appears that Joshua will move forward with his rematch versus Ukraine’s Usyk (19-0, 13 KOs).

Joshua had an immediate rematch clause in his contract, despite that Usyk was the WBO’s mandatory challenger for one of his four titles. Rematch clauses typically are prohibited in contracts for championship matches mandated by sanctioning organizations.