Gennadiy Golovkin in camp and preparing for next fight 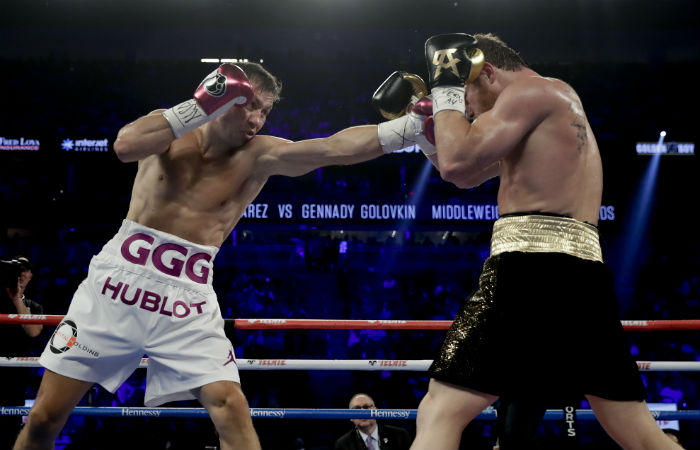 IBF middleweight titleholder Gennadiy Golovkin is sort of the king by default in the 160-pound division at the moment, with Canelo Alvarez looking like he’s moving up to 168 permanently, and the likes of Jermall Charlo and Demetrius Andrade having not yet really made their mark past winning their own trinkets.

The 38-year-old Golovkin (40-1-1, 35 KO) is expected to face mandatory challenger Kamil Szeremeta (21-0, 5 KO), a 30-year-old Polish fighter and former European champion who, being honest, isn’t expected to present Golovkin with much trouble.

GGG told Matchroom’s Chris Lloyd that he’s training in Big Bear, and trainer Johnathon Banks has just arrived for camp. The two have had a pair of fights together following Golovkin’s pretty nasty public split with longtime trainer Abel Sanchez following Golovkin’s controversial 2018 loss to Canelo Alvarez in their rematch.

In his two fights with Banks, Golovkin trounced an overmatched Steve Rolls but met a lot of resistance against Sergiy Derevyanchenko last October, which was the last time we saw Gennadiy in the ring.

“I like him a lot. I should say that we hit it off immediately,” Golovkin said of Banks. “We have found the common language, we have the common understanding of where we’re going, and I like his ideas a lot. Now we’re going to try those ideas.”

With 20 successful middleweight title defenses over his career, Golovkin is primed to break a record he currently jointly holds with Bernard Hopkins for most title defenses in the division. He considers it a chance to really make history, and set a new benchmark for young middleweights coming up.

“I think it’s great that younger generations set new marks, new goals, and in turn, it will challenge the new generation,” he said. “Me setting this mark will allow the new generation of boxers to try to beat my record, and I believe that’s amazing.”

There has been talk for years now of Golovkin possibly moving up to 168 pounds, but outside of fighting Rolls at a 164-pound catchweight, Golovkin has been a tried and true middleweight for his entire 14-year pro career. He didn’t provide much insight when asked if he’d move up to a new weight, saying that some things could be easier for him at 168, while others may prove more difficult.

And as for sharing the ring with a lot of good fighters in his career, the Kazakh star says he doesn’t learn about specific fighters as much as he does more about the sport.

“I learn more about boxing itself than about a particular boxer. The more you fight, the more you analyze, the smarter you become,” he said. “The better boxer you become. Each boxer demonstrates that this sport is truly limitless, it’s infinite. Each has its own style, each has its own approach. There’s no limit.”

Nothing about Canelo was discussed, it should be noted, but everyone knows DAZN are pushing for that fight from arguably their two biggest stars, who both have long-term deals with the platform. It would be easily the biggest fight on the service to date, and we’re going back into late-2018 there, which isn’t forever, but it’s not nothing. A third Canelo-GGG fight would be much bigger than anything either of them have done on the platform thus far.

But that may come in time. For now, Golovkin will focus on a Szeremeta fight, Canelo will focus on whatever he plans to do in September (tentatively), and then it may be revisited for 2021. It’s a fight that most likely requires fans in attendance helping to make up some money at the gate, and obviously right now that’s not quite on the docket.