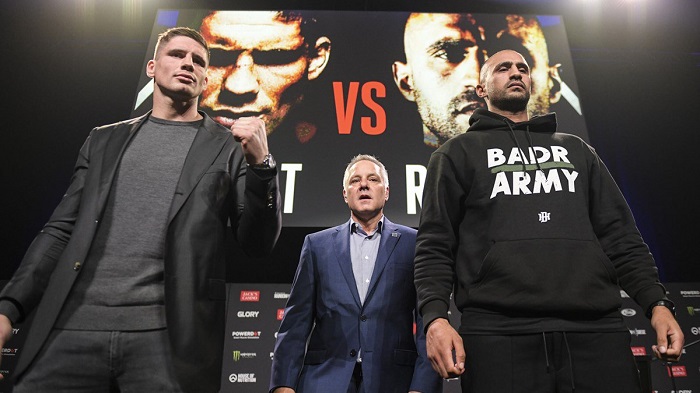 GLORY: COLLISION 2 aired live and exclusively on the Veronica network in the Netherlands from 8pm and immediately occupied the #6 slot in the national viewer ratings. The broadcast continued to climb in the ratings as it progressed, passing through the #5, #3 and #2 positions before peaking at #1 with the main event.

The 3.5 million viewers watching the main event constituted 53% of the live television audience in the Netherlands. The preceding bout, between Luis Tavares and Stéphane Susperregui drew 2.2 million viewers.

All told the broadcast drew five times the viewership which tuned in for the first fight between Verhoeven and Hari in 2016, according to TV ratings group Stichting KijkOnderzoek (Association of Television Viewer Measurement).

The broadcast now ranks as the #2 live sports television broadcast of all time in the Netherlands. Worldwide viewership numbers are still being finalized but are already indicating that GLORY: COLLISION 2 is the most-watched GLORY event of all time.

“This was an epic sports moment which drew the attention of an entire country. GLORY’s core mission is to give fans the fights they want to see and we are humbled by their amazing response to this event,” said Marshall Zelaznik, GLORY CEO.

“Our thanks go out to the fans in the Netherlands, our partners at Talpa TV and Veronica who helped us make this happen and to the tens of millions of fans who watched around the world. Everyone involved in this – from fighters, to GLORY staff, to viewers and the 31,000 fans who crowded into the sold-out GelreDome, was part of a landmark moment in sports history.”

The world heavyweight championship was on the line in the main event. Defending champion Verhoeven was tested more stiffly than at any time in his career to date, suffering two knockdows and being behind on the scorecard before Hari, attempting to score a spectacular knockout, sustained an injury while delivering a spinning heel kick.

The fight was waved off at 0:59 of the third round, potentially setting the stage for a third encounter between the two.