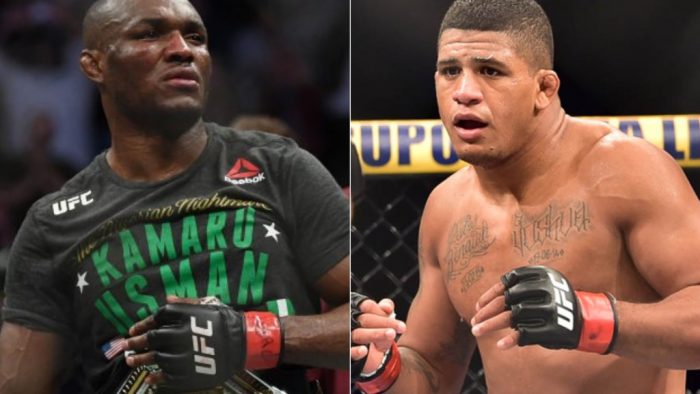 Kamaru Usman proved once again that he’s the best welterweight on the planet with another jaw-dropping performance in the UFC 258 main event.

This time around, however, Usman had to face a former teammate in Gilbert Burns and while it wasn’t the ideal scenario, he showed there are no friends in the octagon as he survived an early scare and then finished the No. 1 ranked welterweight contender with strikes in the third round.

“This one was a tough one,” Usman said following his 13th straight win in the division. “It was a very, very tough one. The whole gym situation with me leaving, first and foremost, you cannot discredit what Gilbert Burns has done in this division. We started together. He showed it tonight. But I said it, I’m the varsity guy. My fight IQ is different.

There was no glove touch to start the fight, which led to an intense opening that had Burns just marching Usman down and unloading with a huge overhand right that dropped the champion to the ground during the first exchange. Burns followed up with another stiff punch that kept Usman on wobbly legs but the challenger didn’t exert himself too much once he realized his former teammate had recovered.

While Burns was still connecting with more power shots on the feet, Usman began establishing a good lead jab that was landing with regularity. Once Usman established the jab with his left, he began unloading the right hand behind it and Burns was struggling to stop either punch.
Midway through the second round, Usman landed a clubbing overhand right of his own that had Burns on rubber legs as he leapt forward for a takedown attempt just to keep the champion from doing any more damage. As time was ticking away, Usman put Burns down with that same lead jab that was now landing at will and the momentum had completely shifted in his favor.

As soon as the third round started, Usman had actually switched from orthodox to southpaw and that’s when he unleashed another jab — this time with a stinging right hand that put Burns down for the final time.

“I knew I had a good jab from the southpaw,” Usman said. “I’m mainly a conventional fighter but I like to switch stance.”

Once Burns hit the ground, Usman followed up with a punishing barrage of strikes and referee Herb Dean had no choice but to stop the contest with the end coming at just 34 seconds into the third round.

After the fight ended, Usman embraced Burns, who had tears running down his face as he suffered a loss in his first attempt at becoming a UFC champion. While it wasn’t easy to deliver that kind of finish, Usman knows that was his job on Saturday night.

“When you step into my cage, we have to go to work,” Usman said. “There was no friends in there. No friends at all. I am the best on the planet for a reason. You need to put some respect on my f**king name.”

With the win, Usman has now dispatched yet another top contender while cementing his spot as the undisputed UFC welterweight champion. Afterwards, Usman wasted no time turning his attention to a former foe as a potential next opponent as he looks ahead at his next title defense.

“We got this little street thug call himself Jesus, thinking he’s Jesus,” Usman said referencing Jorge Masvidal. “They tried to make that fight but he kept backing out. The only reason this man took the fight is because it was on six days notice and he had a built in excuse. And he’s still running his mouth talking.

“Guess what? It’s not done. I’ll give you a whole training camp. I guarantee you won’t sign on that dotted line because this time I’m going to finish your ass.”