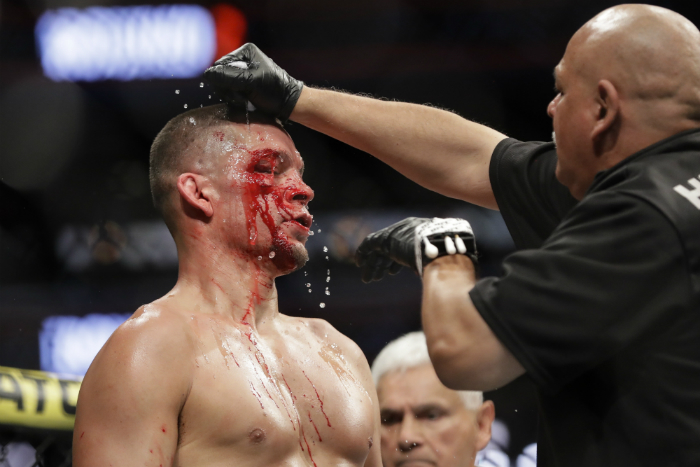 A three-round war with Jorge Masvidal that ended due to cuts suffered early in the fight will only keep Nate Diaz sidelined a maximum of 90 days following UFC 244 in New York.

On Tuesday, the New York State Athletic Commission released the full medical suspensions to MMA Fighting for the card held at Madison Square Garden this past weekend.

No fighter was suspended for more than 90 days total.

Diaz was at the top of the list with a 90-day suspension, although he could be eligible to compete sooner if he gets medical clearance ahead of that date.

Diaz suffered a gruesome cut over his right eye during the opening round of his fight against Masvidal that crowned the first ever “BMF” champion. Diaz had another cut opened up under his right cheek and due to the lacerations along with the punishment he already absorbed, the ringside physician opted to stop the contest at the end of the third round.

It was a frightening knockout as Lee connected flush, which then sent Gillespie crashing to the canvas in a heap and that’s where he stayed for several minutes while medical personnel tended to him.

He eventually left the Octagon on his own power.

One more notable mention from UFC 244 was heavyweight Jairzinho Rozenstruik, who knocked out Andrei Arlovski in just 29 seconds and then accepted a short-notice fight against Alistair Overeem at UFC on ESPN 7 on Dec. 14.

Rozenstruik only received a mandatory seven-day suspension to rest so nothing will stand in his way to compete against Overeem in just over four weeks’ time.

Here are the full medical suspensions for UFC 244: Masvidal vs. Diaz per the New York State Athletic Commission. Per the commission, all of the suspensions could be lifted early with medical clearance.