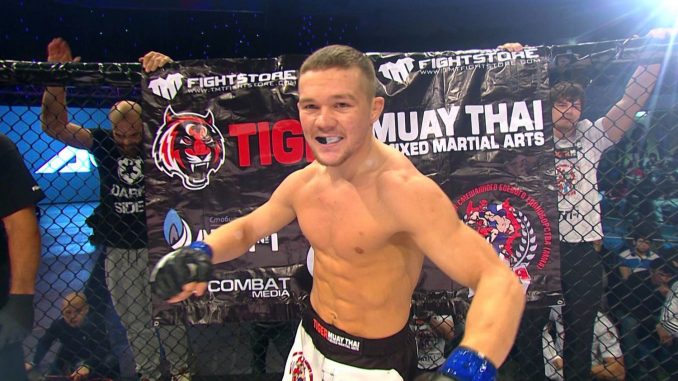 Petr Yan is hoping for a “big fight” in the form of former champ TJ Dillashaw after he defeats Aljamain Sterling at UFC 259.

The UFC’s reigning bantamweight champion, Yan (15-1 MMA), will square off with Sterling (19-3 MMA) on the main card of this Saturday’s pay-per-view event in Las Vegas.

The Russian will enter the highly anticipated title bout on a ten-fight win streak, his latest being a fifth-round TKO victory over MMA legend Jose Aldo at UFC 251.

Meanwhile, Sterling will enter the contest on a five-fight winning streak, his most recent victory being a first round submission over Cory Sandhagen.

While Petr Yan is certainly not underestimating Aljamain Sterling, he does feel that a win over ‘Funk Master’ should earn him a “big fight” against TJ Dillashaw next time out.

“If I win easy over Sterling, next fight has to be very big. Sandhagen, he lost to Sterling. I think maybe Dillashaw,” Yan said during a recent interview on Fanatics View (via MMAMania). “T.J. Dillashaw is back after doping tests and I want to fight him.”

Dillashaw (16-4 MMA) has not competed since suffering a first round TKO loss to Henry Cejudo in his bid for the promotions flyweight title. ‘Killashaw’ was later stripped of his bantamweight title and subsequently suspended after it was revealed that he had tested positive for the banned substance EPO.

Regardless of Dillashaw’s controversial past, Petr Yan believes he is a much bigger draw when compared to Cory Sandhagen. ‘The Sandman’ is currently on a two-fight win streak, with both victories coming by way of knockout over perennial division contenders Marlon Moraes and Frankie Edgar.

TJ Dillashaw recently shared his prediction for this weekend’s UFC 259 bantamweight title fight between Petr Yan and Aljamain Sterling, and believes fans will hear “and still” on Saturday evening.

“He lost in the past to a guy that’s in Bellator just by getting outwrestled, so we’ll see the gains he’s made in his MMA wrestling,” Dillashaw said of Yan. “I would still probably put my money on Yan just because he’s a little more well-rounded, structurally and on the feet. I think he’ll be able to keep the distance good enough. But you can’t underestimate a tough-nosed wrestler. So he can’t be counting his chickens before they hatch because he’s trying to call me out, but he’s got to get past Sterling and stay on top.”