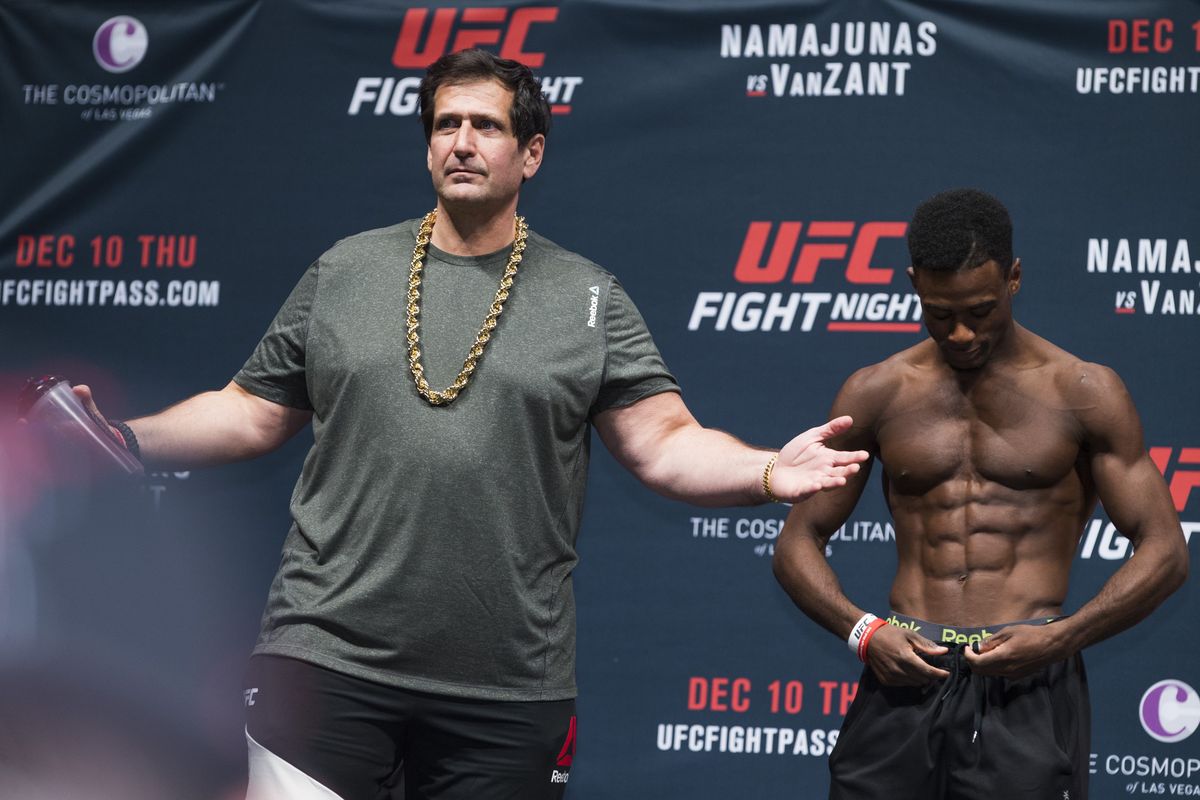 Al Iaquinta has headlined the past two events he’s fought at and his coach Ray Longo thinks it’s time for him to reel in the biggest fish in MMA.

Few fighters in the UFC’s lightweight division are hotter than Iaquinta right now. Having just picked up second unanimous decision win over fellow contender Kevin Lee this past Saturday at UFC on FOX 31 in Milwaukee, Iaquinta has now won six of his last seven fights with his only loss during that stretch coming via unanimous decision to Khabib Nurmagomedov. That fight, which headlined UFC 223 in April, only came about after Iaquinta was pulled from a bout with Paul Felder so that Nurmagomedov would have an opponent for a scheduled lightweight championship bout that saw two different opponents (Tony Ferguson, then Max Holloway) withdraw.

Now that Iaquinta is back on the winning track, Longo wants to match him up with UFC star Conor McGregor, one of the promotion’s most proven draws.

“I’d really like to see him fight Conor next,” Longo told Luke Thomas on The MMA Hour. “I don’t think Conor deserves the Khabib rematch at all. It looks like they’re going to give Ferguson Khabib, which is 100 percent fair. That makes fair sense, not everything is fair sense, it’s money sense.

“But I’d like to see Al get a big money fight against a great guy who can bring a lot of eyeballs to pay-per-view. I think that would be great. I think Al deserves it and I think that’s a great matchup. I’d love to see it and I’d love to be a part of it.”

Though Iaquinta has long been known by the moniker “Raging Al”, he appeared to show a softer side both in the lead-up and aftermath of the UFC on FOX 31 main event. He made little attempt to insult Lee and after out-striking him on fight night, he was nothing but respectful afterwards as well.

This more mature Iaquinta could find himself forced to engage in mental warfare should he and McGregor be paired up, but Longo joked that he’s more worried about what McGregor would dig up on himself than his fighter.

“I think I take that back, I don’t even think I want that in my life,” Longo said. “I think I’d rather run for political office than have that guy researching, doing my background checks. But I don’t think Al gives a shit. I think it’s all good. I think Conor knows who he can get away with that shit with and who he can’t, he’s a street kid. I think that will be to no avail and that’s all good stuff.

“It’s entertainment at the end of the day, I don’t take anything personal at this point. Al just wants to fight. It’s almost like what he did with Kevin Lee. Same Al. That’s what you want to say? Now’s your time to do it. It’s put up or shut up.”

Even taking into account the enormous success he’s had, Iaquinta is one of several contenders in a 155-pound division that is arguably the deepest in all of MMA. UFC on FOX 31 was almost a showcase for the division, with Iaquinta, Edson Barboza, and Charles Oliveira shining on the main card, and promising prospects Drakkar Klose and Joaquim Silva picking up important wins on the preliminaries.

And that’s not even mentioning the likes of Ferguson and Dustin Poirier who are waiting in the wings for the right opponent. Post-fight, Iaquinta mentioned Ferguson as a potential opponent and that’s a matchup Longo would welcome if Ferguson and Nurmagomedov are not booked to compete against one another soon.

That’s a great fight. I got Ferguson up there,” Longo said. “Ferguson is unbelievable, so that’s a great challenge for Al, but I think Ferguson does deserve the fight with Khabib. I’m just going based on that.

“Al’s going to take any fight, I think he deserves a big fight for sure either way it goes. I think Ferguson, the Khabib fight is the way to go because Ferguson, what else can that guy do in the division? I think it’s only fair to give him the title fight. But if it has to be Al for some reason then that’s fine, that’s great.”