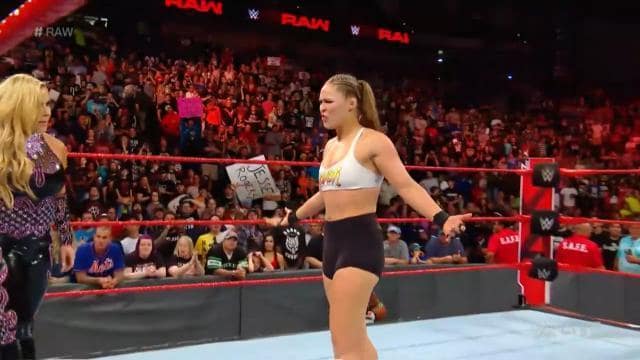 The trailblazer who competed in the UFC’s first-ever women’s fight will now perform in the first-ever women’s main event of WrestleMania, it was announced Monday by WWE. Rousey will take on Charlotte Flair and Becky Lynch in a triple threat match for the WWE Raw women’s title.

WrestleMania 35 takes place April 7 at MetLife Stadium in New Jersey and will air on the digital WWE Network streaming service. A crowd of more than 50,000 is expected.

Rousey, 32, emerged onto the MMA scene in Strikeforce, winning that promotion’s women’s bantamweight title in 2012. Her uncanny finishing ability, athleticism, charisma and star quality caught the attention of UFC president Dana White, who had vowed that women would never be in the UFC. Rousey was an Olympic bronze medalist in judo and was about to take another sport by storm.

Later in 2012, White made a wise business decision. Rousey was brought into the UFC and immediately made the first-ever women’s bantamweight champion in the promotion. On Feb. 23, 2013, Rousey and Liz Carmouche competed in the first women’s fight in UFC history, headlining UFC 157. Rousey won — like she had many times before and would many times after — by first-round armbar.

In three years with the UFC, Rousey became a household name and one of the most popular women’s athletes on the planet. She won ESPYs and earned movie roles. Rousey’s six title defenses remain a record among women. She headlined events in the United States, Brazil and Australia and was one of the biggest draws in the sport’s history.

Rousey (12-2) lost the title to Holly Holm at UFC 193 in 2015 by knockout and was defeated in the same way by Amanda Nunes a year later. At that point, the California native stepped away from the sport. In 2018, Rousey was inducted into the UFC Hall of Fame.

Also last year, Rousey, a longtime pro wrestling fan, debuted in WWE at WrestleMania 34. She stole the show in her first pro wrestling match ever, teaming with Kurt Angle to defeat Triple H and Stephanie McMahon. Rousey became the Raw women’s champion in August and will take that belt into WrestleMania as the reigning champion.

For months, Rousey has been embroiled in a storyline feud against Lynch, the fiery Irish star who has coined her nickname as “The Man,” and Flair, the real-life daughter of Ric Flair. That storyline will culminate at WrestleMania 35 in the main event.