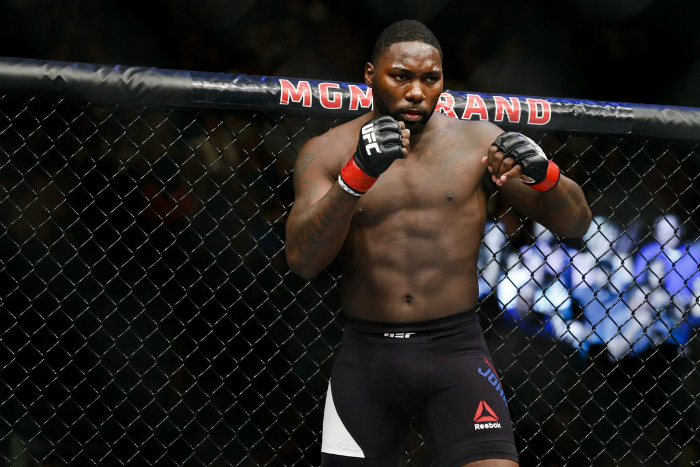 Though it’s not set in stone yet, all signs are pointing to Anthony Johnson returning to the UFC next year.

Earlier this year, the man known as “Rumble” announced that he would be coming out of retirement and returning to active competition. Johnson walked away from the sport after a failed title bid against Daniel Cormier in 2017, opting to pursue other career interests in the CBD and medical marijuana industry. And while he couldn’t avoid the clarion call of combat for too long, Johnson says his time away from the sport was critical and has reinvigorated him for his comeback.

Speaking with The Mac Life over the weekend, a noticeably slimmer Johnson discussed his return to training and the necessity of taking his hiatus.

“I’m trying to get my slim on, you know what I mean?” Johnson said. “I was up to probably 280 and that was the worst I’ve ever been. That’s the worst anyone’s ever gonna see me and I’ll never be back up there again. But I needed it to happen. I needed to hit rock bottom as far as the way I was, going to the gym and taking care of myself. Going to the gym since I was eight, it can take a lot of wear and tear on any human being, so I’m glad I took the break that I took.

“I’m coming back now and I feel a lot better, my punches are stronger, harder, faster. The other day my coach said, ‘AJ, you’re still dangerous.’ He walked up to me after – this was the second time he saw me spar, because he’s been gone – he came up to me and said, ‘AJ, you’re still dangerous. You’re still very fast and punch hard.’ I’ve knocked out two people already in training in the first two days of sparring so I feel like everything is clicking.”

Before his retirement, Rumble was one of the most feared fighters in the UFC, and even after he left the sport, he was never far from questions about his return, most notably about possibly facing UFC light heavyweight champion Jon Jones. Jones and Johnson were supposed to face each other at UFC 187 but before that could come to pass, Jones was stripped of his title and suspended by the UFC for a hit-and-run incident. Jones’ ensuing three-year mission of self-sabotage resulted in the two somehow never facing off with one another and though fans are still clamoring for the bout, Johnson seems more focused on the heavyweight division for his return, noting that he’s still a bit bigger than what he used to be for competing at 205 pounds.

“Right now I feel good being at 240,” Johnson said. “If I were to fight right now at heavyweight for 240, I’d feel just fine. I feel like I still have my strength. I’m definitely not going to be one of the bigger heavyweight guys, there’s some monsters at heavyweight, but my advantage would probably be speed over a majority of those guys. Everybody at heavyweight for the most part has power but I think I’m much faster than those guys and I’ll probably have a little bit more knockout power. Don’t take that from me, I’m just saying.

“Those guys at heavyweight are amazing. I look forward to fighting all of them.”

But don’t get too excited just yet. Though Johnson wants to return and the UFC also seems interested, things are far from complete. Johnson has still yet to re-enter the USADA testing pool and will be required to be in the pool for at least six months before he can compete again. Johnson says he hasn’t re-entered because negotiations with the UFC, though trending in the right direction, are not finished yet but once that’s all squared away, he intends to make it all worth the wait for fans.

“We have to meet with the UFC some more,” Rumble said. “We have to go over things and just figure some stuff out but it’s all looking good so far. Nothing bad. I don’t want to put my foot in my mouth and say too much but everything’s looking good right now. I’m not worried.

“I was trying to shoot for April/May but maybe June/July. We’ll see. But whenever I come back I’m going to make sure it’s known. I want to come back and showcase everything and fight and just hurt people.”