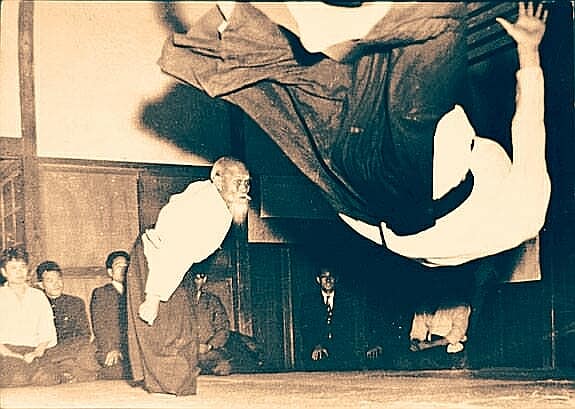 Tada family had a dojo in their house and that’s where he use to practice. The same is true for horsemanship. A proper samurai would have a stable and practice there. You wouldn’t have to go to school for that.

This was in Tokyo, in Jyugaoka. Tada was born in the University of Tokyo hospital, when it was still in Nishikatamachi. His father was at the Tokyo Imperial University at that time. In 1933 they moved to Jiyugaoka. The house was large and Jiyugaoka at that time was still countryside. He started to practice with the sword in primary school and when he was a student he also practiced Karate with Funakoshi Gichin Sensei.
The Shotokan. This is how people called it. Sensei did not call it like that. Shoto was Funakoshi Gichin Sensei’s pen name. It is the same kanji as the one used for the Shoto district in Shibuya. Shoto means “the wind rustling in the pine needles sounds like waves”. Tada Hiroshi had known Ueshiba about it since childhood. He had often hear about it during the war, when he was in 3rd or 4th grade. Many famous people were studying this exceptional Budo. Yano Ichiro, the former president of Dai-Ichi Seimei, was a close friend of his father. He had started Kendo as a child at Hibiya High School and did it all the way through and Tokyo University. Then he became the chairman of the Businessmen’s Association and he was also holding the highest degree (Hanshi) of the Butokukai. Mr Yano said about O Sensei that: “Compared to Ueshiba Morihei Sensei I am like a baby”. That’s what Tada heard as a child.

Tada went to Manchuria in 1941, it was the 10th anniversary of the founding of the Manchu state. There was a meeting of Budoka from all over Japan. There was a large demonstration at the Hall of Martial Arts in front of the Last Emperor of China. He heard that the demonstration that Ueshiba Sensei gave that time was incredible.