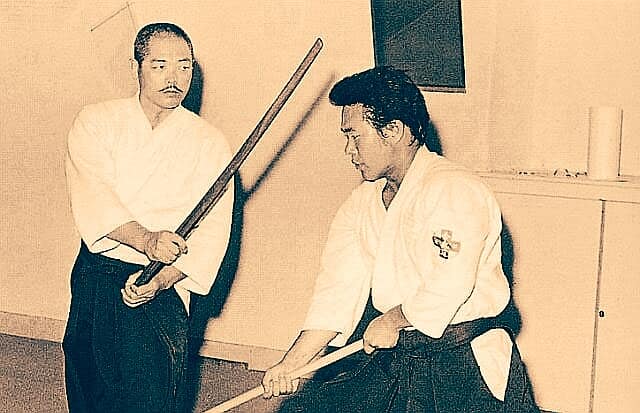 In Tokyo, Kobayashi stayed altogether for about nine years. In 1954 he moved to Osaka. Morihei Ueshiba was nearly each month in Osaka, in order to hold ten-day-long training courses. Kobayashi Sensei was the chief instructor at Kansai in 1970, and he usually acted Ueshiba Sensei’s uke whenever he visited Kansai.

In 1957, Kobayashi started training full-time in aikido. If he did not accompany Ueshiba, he taught at universities in Osaka and Kobe. In 1964 he was awarded 7th dan. In this year he was asked by Ueshiba for the first time to teach aikido in Europe. Until 1996 Kobayashi visited Europe each year for several weeks. He gave regular training courses in France, Switzerland, Belgium, Italy, Germany and in the Netherlands. His techniques were described as very short, powerful and precise with as little movement offline as possible. His grabbing techniques consisted of “Meguri” – literally meaning flexibility and rotating of the wrist producing subtle connection points producing the maximum result with minimal levels of effort.

A memorable phrase of Kobayashi’s was: “Teach everything you know/have, then you feel thirsty for a higher level.” Some other words people often heard him repeat while on the mat were “Itsumo manaka” (always towards the centre) and “Ima” (right now).