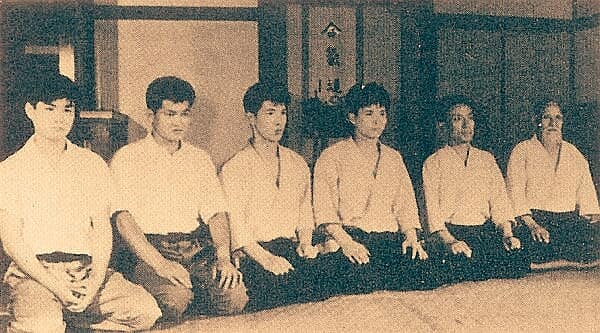 In 1970 he was promoted to 6th Dan and awarded the title Shihan, Master Instructor. In 1975, Chiba returned to Japan to serve as Secretary of the International Department at the Aikikai Hombu Dojo.

During the ten years Chiba spent in the UK, he also helped to promote Aikido across Europe particularly in Belgium, France, Greece, Ireland, Italy, the Netherlands, Morocco, Spain and Switzerland.

Chiba Sensei faced much racism in the post-war culture of Britain since the Japanese had been on the opposing side. On arrival his luggage was turned out and he was taken to a separate room to be questioned about the purposes of his visit. He told the immigration officers that he was there to teach martial arts (which he subsequently thought was an unwise thing to do) and showed them the contract from the British Judo Council (BJC).

As a result, a representative of Mr Logan, who had been with Kenshiro Abbe during the visit to Hombu Dojo and who was Chiba Sensei’s sponsor, was brought in to represent the BJC and to account for Chiba Sensei’s visit and after several hours he was released. After leaving the airport they went to King’s Cross Station and boarded a train for Newcastle. Mr Logan intended to establish Chiba Sensei in Newcastle with mats which had been shipped on the same boat that bore him to England.

Chiba Sensei spoke limited English when he arrived in the UK. It was more than a month after arrival that Mr Logan informed him that he intended to bring home a Japanese interpreter, Mr Kimura, who spoke fluent English and worked for the company affiliated with Common Brothers Shipping – the company of which Mr Logan was an executive.

This helped mediate what had become a long and lonely period in the UK, but it did not resolve many of the problems which were to occur later.

The encounter with English life was at first difficult for Chiba Sensei. The British climate was in stark contrast to his home, in particular the lack of sun caused him sleeping difficulties and Mrs Logan would wake him at 08:00 with a cup of English tea which he did not enjoy at the time, though later in life he became a great fan of Builder’s tea he commented that ‘I could not stop dreaming of soy sauce.’ Moreover, the tradition of high tea with guests speaking ‘ceaselessly’ to each-other was a profound culture shock.