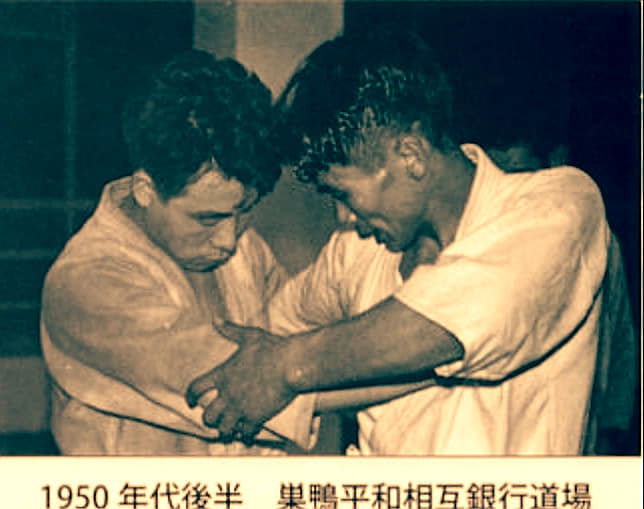 Shoji Nishio was born in 1927 in the Aomori Prefecture of northern Japan. In 1942, at the age of 15, amidst the chaos of WW II, he moved to Tokyo where he began working for the Ministry of Finance in the Japanese Mint. At the same time he started practicing judo in a nearby dojo. The war ended August 15, 1945 and on September 1st he went to join the Kodokan, the world headquarters of judo. When he arrived the building was a mess, windows blown out from the bombings, and no one was there but an old caretaker. There were no application forms so Nishio just wrote his name on a plain piece of paper and left it there. Nishio recalls with amusement that he was the first person to join the Kodokan after the war. Sometimes he would go to train and nobody would be there so he would just spend the time practicing ukemi and then go home.

By the next year things at the Kodokan began picking up. Nishio trained under the famous Kyuzo Mifune (1883-1965) 10th dan judo, the fourth of only eighteen 10th dan’s ever awarded by the Kodokan. Mifune was considered one of the greatest judo practitioners ever. Nishio liked the hard training, but by the age of 23 he was becoming dissatisfied with the practical limitations that competition placed on judo. So he began training in karate under Yasuhiro Konishi (1893-1983), one of the first karate teachers in mainland Japan. Yasuhiro Konishi was a leading force in the development and acceptance of karate in Japan. Konishi was the founder of Shindō jinen-ryū (神道自然流) karate. Konishi also studied Aikido under Morihei Ueshiba, a relationship that extended back to the 1930′s when Ueshiba was teaching at his Kobukan Dojo in the Shinjuku ward of Tokyo. Konishi demonstrated Heian Nidan (a kata from Okinawan karate) for Ueshiba who commented to Konishi that he should stop wasting his time with ineffective techniques. Inspired by Uehiba’s frank comments, Konishi developed a kata he called Tai Sabaki (“body movement”). Ueshiba then remarked, “The demonstration you did just now was satisfactory to me and that is a kata worth mastering.” Konishi developed three kata, Tai Sabaki Shodan, Tai Sabaki Nidan and Tai Sabaki Sandan, all based on the same principles inspired by Ueshiba. Konishi said that Ueshiba was the best martial artist he had ever known.