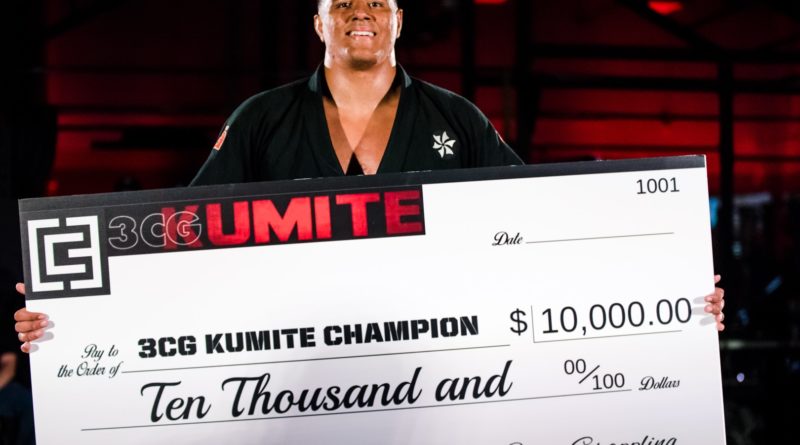 Some rose and some shone in the lone star state as Texas was the setting of yet another Jiu-Jitsu battleground with Third Coast Grappling: Kumite 2 the day after Fight to Win 144 came and took it. And by it, I mean the new guard came and took to arms — or rather, an arm — as a beloved and respected grappling legend was submitted via an armbar. The day after, all eyes were on The Bayou City to outdo said event, with the perennial Houston-Dallas rivalry still aflame, and this event lived up to expectations and more.

The first salvo had reigning Kumite 1 champ Gustavo “Braguinha” Batista battle California kid Tanner “the Ginger” Rice. It was the story of back-and-forth sweeps that ended in a mount by Batista who won by points, 11-2.

Next up, Fellipe Andrew against all-American Jake Watson. Two straight ankle locks, surprisingly, were attempted by Watson but Andrew defended well. It went to overtime and ended as Andrew garnered points by passing Watson’s guard to attain and maintain side control.

Tremors ensued as behemoths Ricardo “Jegue” Evangelista and Victor Hugo hit the mats. Hugo racked up 8 points before time ran out in regulation as he was going for an armbar. He chose bottom closed guard in overtime and subsequently earned his name as he emerged the victor via referee’s decision.

Rising stars try to outshine each other as Jonnatas Gracie, fresh off a close decision win just the night before, faces yet another exciting Gracie Barra trailblazer in Pedro Marinho. 50/50 was the position both fighters were entangled in for the most part, only to go to overtime with a 4-2 score. Gracie managed to earn first points with a sweep in overtime, 2-0

The second round was initiated by Batista and Andrew. Noticeable was the size disparity as the two faced off. It proved to be a close contest as no guard was passed during regulation. Andrew chose to start the overtime round standing. Two close calls came with Batista almost taking Andrew’s back at two different junctures and from different scrambles. These attempts were not enough as Andrew was seen as more aggressive on top, enough to earn the win by referee’s decision.

Less glaring but a size disparity nonetheless, Hugo met Gracie for their turn in the second round. Hugo swept the lighter Gracie to end up in mount then a subsequent back-take and finish by Ezekiel choke, all within regulation.

Finals: Andrew vs Hugo
Barely over a week after the two fought, Victor Hugo and Fellipe Andrew are at it again, this time in the finals of an eight-man tournament. Andrew started off with apparently a different game plan as their previous match, not pulling guard this time but with what looked like a morote seoi nage attempt, although Hugo managed to get up instantaneously. After some grip-fighting the two ended up on the mats with an unsuccessful flying triangle on Hugo’s part. Some scrambling ensued which led to both attempting a leg lock on each other which ended up with Hugo submitting Andrew with an Estima lock.