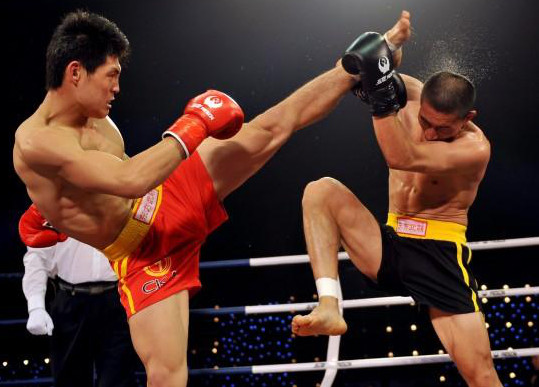 According to the South China Morning Post 13 people were arrested last week in connection to an armed assault on kickboxer Ronald Wong, 24. It is believed the incident is connected to an escalating gang war between two rival Triad groups.

The attack on Wong happened on March 1st in Hong Kong’s Sha Tin district. It began after Wong parked his BMW and was then surrounded by five men. The men are reported to have opened Wong’s car door before attacking him with knives. Some of the men also hit Wong’s car with hammers.

Though his leg was badly wounded, Wong was able to escape the car and flee towards a busy road. A passerby discovered Wong and called police. Wong was then sent to Queen Elizabeth Hospital in Yau Ma Tei for treatment.

Wong is a Muay Thai kickboxer who represented Hong Kong in the East Asian Muay Thai Championships last year. The morning after he was attacked four men were arrested under suspicion of wounding.

SCMP reported that investigators from Hong Kong’s anti-triad unit have been investigating the attack. Sources told that outlet that there is a possibility that Wong’s stabbing is a revenge attack for an incident that occurred a week earlier.

That prior incident saw a 26-year-old man, believed to be a member of the Sun Yee On Triad group, receive slashes to his arms and legs inside a McDonald’s in Cheung Sha Wan. That man’s attackers were believed to be from the rival triad group known as Wo Shing Wo.

Sun Yee On, which was established in Hong Kong in 1919, is one of China’s leading Triad groups. Today it boasts territory in the UK, Belgium, France, Netherlands, Thailand, Australia, Canada, and the U.S. Sun Yee On is alleged to be involved in racketeering, counterfeiting, drug trafficking, illegal gambling, and prostitution.

Wo Shing Wo was founded in the 1930s, also in Hong Kong. Wo Shing Wo, which is allegedly involved in similar activities to Sun Yee On, also claims territory in the U.S, Canada, and the UK.

Days after the attack on Wong nine more people were arrested. During these raids a car was seized close to where Wong was attacked. Inside the car investigators found two machetes, three butcher knives, seven cans of pepper spray, a hammer, and a window breaker.

This incident is one of dozens of violent incidents that have hit Hong Kong in the past few months. The violence, which has involved a number of armed assaults, has lead to an increased crackdown on Triad activities by Hong Kong’s Organized Crime and Triad Bureau.

Wong, who was reported as being in serious condition last week, has not been named as a member of any Triad group.