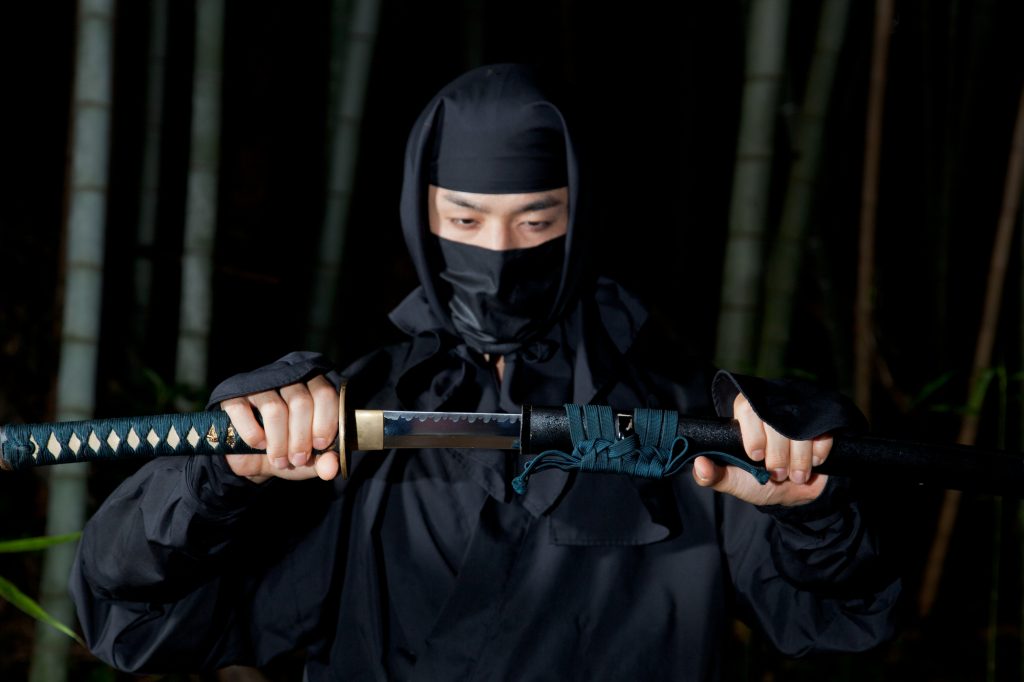 The popular website kwunion.com posted new article about the way of the ninja.

In modern culture, the ninja are often portrayed as cold-blooded assassins, men and occasionally women garbed in black and armed with samurai swords and throwing stars, agents who appear out of nowhere in the shadows of the night to dispatch their victims without mercy.

They’re said to possess magical powers, including invisibility and the ability to walk on water. They’re depicted as the owners of physical skills that could give Olympic athletes a run for their money. Once in a while, you even hear a fantastical statement like, “Only a ninja can kill another ninja.”

That kind of hype might be fine for entertaining kids who were raised on comic books, video games and Teenage Mutant Ninja Turtles flicks. But adults tend to prefer a dose of historical accuracy in their movies and books.

Most Americans got their first glimpse of ninjutsu in 1967 thanks to the James Bond movie You Only Live Twice. By the 1980s, the Western world found itself in a ninja craze, and that’s what prompted me to start consuming every ninja book, article and documentary I could find. I learned that the ninja’s reputation had been exaggerated by the media. Sure, it’s more exciting to portray them as sword-slinging, roof-hopping executioners with mystical powers, but that’s not realistic. To help others expand their awareness of the facts surrounding these men in black, I present the results of my research.

Rank Testing and Social Distancing! Congratulations to all our ninjas who tested today!! pic.twitter.com/8IdEMAcDTf

Where does our historical information on the ninja originate?

Much of it comes from Bansenshukai, a collection of information accumulated by the clans in the Iga and Koga regions of Japan. It was compiled by Fujibayashi Sabuji in 1676 to preserve the know-how that had been developed during the near-constant conflict that raged from the beginning of the Onin War until the end of the Siege of Osaka almost 150 years later.

In addition, there is Shoninki from 1681. Together, these texts are the most important sources of information about this shadowy profession.

Slightly less authoritative is Ninpiden (aka Shinobi Hiden), a manual from 1655 whose name translates as Legends of Ninja Secrets. Some attribute it to Hattori Kiyonobu, while others link it to Hattori Hanzo. In either case, it was passed down within the Hattori family and wasn’t shared with outsiders.

When did the ninja exist?

They lived primarily during the unrest of the Sengoku period (15th century to 17th century). That’s when spies and mercenaries became active in Iga and Koga, and it’s from the clans of these areas that we get much of our knowledge of the ninja [Ancient Warfare: Shinobi Ninjas and Kung Fu Shaolin Monks]. Following the unification of Japan under the Tokugawa shogunate (17th century), the ninja faded into obscurity [Martial Arts of the World: An Encyclopedia, by Thomas A. Green].

Were the ninja really assassins?

Espionage was their chief role. They spent more time spying than killing. While they were trained in covert operations, propaganda, spy craft, infiltration and the use of explosives, they acted as assassins only when other means failed. As such, ninja manuals rarely cover the subject [The Lost Samurai School: Secrets of Mubyoshi Ryu, by Antony Cummins].

How did they operate?

The ninja were not necessarily independent or self-serving. They often hired themselves out to a particular daimyo, or feudal lord, as mercenaries. Unlike the way they’re portrayed in movies, the ninja sought to avoid battlefield engagements, especially when facing a numerically superior enemy. That’s why their strategies focus on cloak-and-dagger methods and hit-and-run tactics.

Were they always called “ninja”?

The word “ninja” didn’t appear until the 1800s, long after the real ninja had disappeared. Before that, the word shinobi was used. Meaning “to sneak,” it described covert agents and mercenaries in feudal Japan. Shinobi appears in writing as far back as the eighth century. In official historical documents, shinobi is almost always used, while ninja is not.

Did the ninja wear masks?

No references to ninja wearing masks have been found. However, they often resorted to covering their faces with their long sleeves when the enemy was near, and when working in groups, they sometimes wore white headbands so they could see each other in the moonlight

In early Japan, ordinary men and women would wear head scarves on colder days. This could have been the origin of what’s become a Hollywood cliché.

Did the ninja wear black?

It’s been argued that ninja wore blue, not black. This stems from the book called Shoninki. It states that a ninja should wear blue to blend in with crowds because blue clothing was popular in Japan. Often, a ninja simply would disguise himself as a civilian [Cummins].

Historian Stephen R. Turnbull suggests that the stereotypical image of the ninja dressed in black comes from kabuki theater. In kabuki, the kuroko, or stage hands, rearrange scenery, move props and assist in costume changes while wearing black from head to toe to convey the notion that they’re invisible and not part of the performance. He says this convention was adopted by kabuki actors who were portraying ninja, and it stuck.

Did the ninja carry samurai swords?

It was illegal for anyone to own or carry a samurai sword unless that person was a samurai. Furthermore, samurai swords weren’t available to the public [Tiger Scroll of the Koga Ninja]. If a ninja was in possession of a stolen samurai sword, it would be the equivalent of impersonating a police officer in modern times, and the ninja could be sentenced to death [Ninja Attack! True Tales of Assassins, Samurai and Outlaws, by Hiroko Yoda].

Then what type of sword did the ninja use?

Many of the swords they used were crafted in mountain villages and, therefore, were crude in comparison to what the samurai used. Some say the blades carried by the ninja were called shinobigatana. They were shorter than a katana so they could be carried across the back — with the hilt projecting above the right shoulder. That kept them accessible while facilitating the scaling of walls and the climbing of trees

The subject, however, is often debated. Before the 20th century, there’s no evidence for the existence of a katana-like short sword that was used by the ninja. Skeptics believe that the designs of modern ninja swords are actually based on the wakizashi or chokuto, the shorter companion swords of the samurai [Ninja: The True Story of Japan’s Secret Warrior Cult, by Stephen R. Turnbull].

Bloody #FlyingAnts look like a ninja coming out my car to the house pic.twitter.com/EXh2pkJ88W

Was the sword the primary weapon of the ninja?

If the goal was to blend in, using or adapting agricultural implements as weapons would have been far more practical. Because the ninja often dressed in disguise — for example, as farmers — carrying a sword would have attracted attention. A more viable option would have been to carry a kusarigama, or a sickle with a weighted chain attached. The weight could be swung to injure, and the sickle could kill at close range. Further, it quickly could have been disassembled into harmless-looking farmer’s tools.

Did the ninja use the nunchaku?

The nunchaku was never known as a battlefield weapon because it was ineffective against long arms such as the sword and spear. Also, being of Okinawan origin, it’s unlikely the ninja used it.